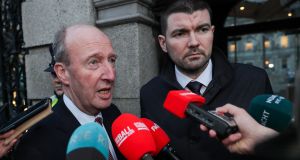 Minister for Transport, Tourism and Sport Shane Ross and Minister of State for Tourism and Sport Brendan Griffin recommended the new system for allocating funds under the Sports Capital Programme to ‘ensure that as much money as possible goes to the most deserving organisations’. Photograph: Morgan Treacy/Inpho

Ten sports clubs, including a school and hockey club in the constituency of Minister for Sport Shane Ross, were excluded from receiving Government grants because of the high fees they charge for members or students.

New rules were introduced after controversy two years ago over the awarding of large grants to two private schools in Mr Ross’s Dublin South base. For the latest round of funding, new rules were in place so that clubs or schools with a once-off entrance fee of more than €1,000 or an annual fee of €1,500 would be “excluded from receiving a grant offer”.

One of the schools to be refused funding under the new arrangement was St Columba’s College, where Mr Ross’s late father was once a governor and where both of his children had also attended. It had made an application as Claesz Enteprises along with Corinthian Hockey Club for €145,000 for “fencing, [a] fitness room, disabled access and dugouts”.

As a general rule, clubs in large urban areas tend to have larger memberships than clubs in rural locations

However, an internal department record listed its annual membership as €8,241 and it was excluded because of its “high fees”. It was one of 10 clubs to lose out under the new arrangements. An internal Department of Transport, Tourism, and Sport document listed two private schools, both in Dublin, and eight golf clubs around the country (four in Dublin) as those to be excluded.

A separate briefing said that the Sports Capital Programme had “been criticised in the past” for funding clubs and schools that charged very high membership or entrance fees for students. New rules on granting them allocations were introduced to “ensure that as much money as possible goes to the most deserving organisations”.

The briefing also explained how even a per capita system of allocating the same amount to each county based on population could end up being unfair. It said that lower numbers of applications from Dublin and the sheer size of some city clubs meant that low-scoring applications in the capital sometimes succeeded. The briefing said: “As a general rule, clubs in large urban areas tend to have larger memberships than clubs in rural locations. Accordingly, allocating purely on a per capita basis does not take into account the economies of scale, particularly the ability of larger clubs to raise [their] own funding for proposed projects.” The briefing said that the highest total grants invariably ended up being in Dublin as a result.

Among the other systems for funding the department looked at was ignoring county boundaries and simply awarding funding to the projects that scored highest in their assessments. However, it cautioned that because all projects in a particular county are assessed by a single person, “consistency in marking” could become an issue. The briefing said: “Moving to a national league table could result in a suggestion that inconsistency between different assessors had a real impact on the level of funding being received by a project or whether an applicant gets funding at all.”

Another possibility was making awards based on demand from each county. However, the briefing explained this was likely to favour rural areas where there were a larger number of smaller clubs. It also warned: “It may seem to encourage areas submitting as many applications as possible as this in itself would increase the amount allocated to that county.”

After each round of the Sports Capital Programme, the Department undertakes a full review

Eventually, a complicated system of excluding the 25 per cent lowest-scoring applications from each county as well as providing funding 50/50 based on population and demand was recommended to Mr Ross and his colleague Brendan Griffin, Minister of State for Tourism and Sport. In total, €37 million was provided as part of the funding round, with another €2.5 million allocated for regional projects.

The new system was signed off with the agreement of the two Ministers in November last year, according to records obtained from the department. In a statement, a department spokeswoman said the 2018 funding round – announced over the course of last year – had attracted a record number of 2,337 applications. She said: “After each round of the Sports Capital Programme, the Department undertakes a full review in order to suggest any possible amendments to the terms and conditions of the scheme.

“The review [for this year] will consider . . . all new measures introduced as part of the 2018 round including the treatment of clubs charging high entry fees.”