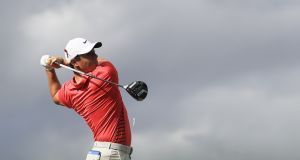 Rory McIlroy hits a tee shot during the first round of the Honda Classic. Photo by Mike Ehrmann/Getty Images

There is an x-factor about Tiger Woods that is infectious, even when his driving proved wayward in the opening round of the Honda Classic at PGA National in Florida. At one point, on the 12th - his third hole - spectators were required to go to Woods’s rescue to move a pretzel stand so that he could play his shot; and, as it turned out, a first round 70, level par, provided evidence that this latest comeback could yet be the real deal.

“I’m trying to get better, more efficient at what I’m doing and also I’m actually doing under the gun, under the pressure of having to hit golf shots, and this golf course is not forgiving whatsoever. I was very happy with the way I hit it,” said Woods, playing back-to-back tournaments for the first time since his return from spinal fusion surgery which had him sidelined for almost a full year.

The driver, though, still proved to be a cause of concern for Woods: he used it five times, but found a fairway only once, and the 3-wood became his choice of club more often off the tee.

With a strong wind posing problems in club selection and execution, a level par opening constituted a very decent effort from Woods, even if it left him four strokes behind clubhouse pacesetters Alex Noren and Webb Simpson, both players relying heavily on their putting in posting their scores.

Sweden’s Noren - who lost a play-off to Jason Day in the Farmers Insurance at Torrey Pines last month - is a wintertime resident of Palm Beach Gardens and opened with a four-under-par 66 alongside former US Open champion Webb Simpson which gave them a one stroke lead over US PGA champion Justin Thomas, Daniel Berger and Morgan Hoffman.

“I spend the winters down the street here, 15 minutes away. So I’m used to wind, but it’s very tricky when it’s so firm. You’ve got to land the ball very short on the greens sometimes downwind and you’ve got to hit so many good iron shots,” claimed Noren, a nine-time winner on the European Tour but still seeking his first win on the PGA Tour stateside.

One of those in pursuit is Rory McIlroy, who exhibited an x-factor of his own as he got off to a fast start with back-to-back birdies on the third and fourth holes only to hand them back to the course with bogeys on the sixth and seventh. Then, it was a case of grinding for McIlroy as he played par golf and especially showed his resilience in the Bear Trap, where he played a recovery from the hazard by the 16th green to maintain that par run. McIlroy then hit a fine tee-shot to the tough Par 3 17th, but failed to convert his 12 footer for birdie.

And McIlroy’s run of 10 straight pars was finished on the risk-and-reward Par 5 18th where, after a near-perfect tee-shot, he was tempted to go for the green in two. It proved to be an unwise decision, his approach curling right into the lake. Forced to take a penalty drop, McIlroy’s approach flew over the back of the green and he failed to get up and down. A closing double-bogey left him signing for a two-over 72, and with much work to do to get back into the mix.

Graeme McDowell also showed his own resilience, following on from his horror show in the final round of last week’s Genesis Open. The Portrush man opened with a level par 70 - two closing birdies enabled McDowell to have a pep in his step on his way to the recorder’s - while Shane Lowry opened with a 71. Lowry showed some fortitude of his own in responding to back-to-back bogeys on the 11th and 12th with birdies on the 13th and 14th.

But it was a day to forget for Harrington who - playing alongside McIlroy and Adam Scott - had manfully battled on from a double-bogey six on the fourth until he hit a wall at the 16th, where a triple bogey seven proved catastrophic.