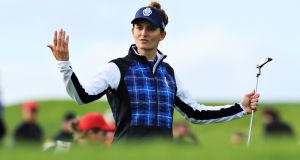 Anne Van Dam of Team Europe during Day 1 of the Solheim Cup at Gleneagles on Friday. Photograph: David Cannon/Getty Images

Captaincy can be defined by bold calls. Match play is so frequently the domain of risk and reward. Catriona Matthew would have inevitably been subject to criticism had Anne van Dam and Suzann Pettersen slumped to Solheim Cup defeat; instead, this unlikely duo produced a four-ball performance which fully rewarded their captain’s faith.

Van Dam, a Solheim Cup debutant, was nerveless as Lizette Salas and Danielle Kang were swatted aside by 4 and 2. Pettersen had undertaken pre-tournament media duties whilst barely able to speak because of a throat problem; the Norwegian was duly left out of yesterday’s opening session. As Pettersen, a controversial pick for this event in the first place from the position of 635 in the world, danced on the opening tee it appeared her ailment wasn’t particularly serious.

In Van Dam and Pettersen (the latter is playing in this event for the ninth time) Matthew had the perfect mix of youth and experience. Pettersen set the tone with a wonderful putt converted from 50ft at the 6th for a two. By the turn, this European team was four up. Hands were shaken on the 16th green. It is of course early days but this felt like a form of redemption for Pettersen, whose previous Solheim involvement had seen her subject to widespread castigation after a farrago involving concession – or not – of a putt in Germany four years ago.

An element of controversy this time surrounded Salas, who was warned over pace of play. That backdrop was a depressing constant on day one. The first fourball match took an hour to play three holes; the outward nine lasted just short of three hours.

As Matthew celebrated the excellence of Van Dam and Pettersen, this proved a grisly Friday the 13th for Caroline Hedwall and Anna Nordqvist. That European pair were demolished, 7 and 5, by Angel Yin and Ally McDonald. The latter is worthy of special praise: she was an 11th-hour substitute here after the back injury suffered by Stacy Lewis. Through 11, McDonald and Yin had combined for seven birdies; they were the same number of holes to the good.

At the end of the day Europe had to settle for a slender 4½-3½ advantage. Carlota Ciganda and Bronte Law fought back from two down with four to play to take the lead up the 18th against Lexi Thompson and Jessica Korda, only for Thompson to make birdie and snatch half a point.

And there was more disappointment for the home side in the final match as Charley Hull and Azahara Munoz were unable to convert a four-hole lead with six to play against Nelly Korda and Brittany Altomare, who birdied five of the holes and saw Korda almost make a hole-in-one on the 17th.

Europe had takena one-point lead into the fourballs, 2½ to 1½. And yet, the overwhelming stars of the foursomes show were American. The Korda sisters, Jessica and Nelly, thumped Jodi Ewart Shadoff and Caroline Masson 6&4.

Petr Korda, the golfers’ father and a former grand slam tennis champion, was amongst the Gleneagles galleries. “It was a lot of fun,” said Nelly Korda. “And when you have your sister by your side she kind of calms you down a little. So you have someone to lean on.” It was, in fact, a surprise that the US captain Juli Inkster split the siblings up for the afternoon. “If we play together, great, but we get along with everybody on the team so we’re happy with whatever,” Nelly insisted.

The opening match of this, the 16th Solheim Cup, was halved as Bronte Law and Carlota Ciganda battled closely with Marina Alex and Morgan Pressel. Georgia Hall and Céline Boutier enjoyed a 2 and 1 success over Lexi Thompson and Brittany Altomare.

Charley Hull’s fondness for this biennial competition was again apparent as she combined with Azahara Muñoz for a 2 and 1 foursomes win over Megan Khang and Annie Park. The same European pair profited again after lunch, this time in opposition to Nelly Korda and Altomare.