Strong second half gets Longford over the line against Offaly 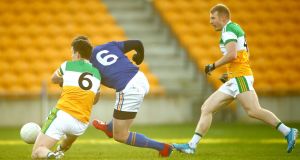 It wasn’t plain sailing but there was no disputing the merit of Longford’s win when they beat Offaly in the O’Byrne Cup final at O’Connor Park.

Longford had to dig deep for their win but they were the better side over the 70 minutes and were particularly strong in the second half as Offaly ran out of steam and ideas.

In the first half, it had looked like the home side could get the win. Offaly played their best football early on and were 0-4 to 0-1 ahead after eight minutes. Longford then fought back and Michael Quinn fired in an equalising goal against the run of play but Offaly soon regained the initiative.

Points from Anton Sullivan and Shane Horan put them two ahead but they then ran into black card trouble with both Shane Nally and Anton Sullivan heading for the sin bin before the interval. It enabled Longford to open them up and they should have scored two goals as the crossbar was hit twice and Paddy Dunican saved well from Rian Brady.

It was all square, 0-6 to 1-3 at the break and they were still tied, 1-5 to 0-8, after 40 minutes before Longford upped the ante all over the field, getting on top in most sectors. They scored three points on the trot to take control and looked likely winners from there on in.

Offaly got the gap back to two with 10 minutes left but Longford kept driving on. They were a safe four up as it entered injury time and held on with a reasonable degree of comfort for their first O’Byrne Cup since 2000.