GAA Statistics: Galway are made to thwart right-sided Mayo

Are Galway playing enough Corofin players? And why Mayo’s attack is so predictable 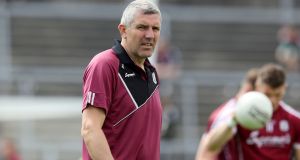 Galway’s defensive system is made for predictable attacks, and that’s why it holds up so well against Mayo.

In their last seven wins over Mayo – they’ve won seven in a row in all competitions against their Connacht rivals – Galway have conceded an average of just 0-6 from play, and only 0-12 per match including frees and the rest.

Mayo are a combative team who look to penetrate quickly, break tackles, get into scoring zones and shoot. They are powerful, brave, talented. But not patient and not balanced.

Mayo's game is about support play, often sacrificing width or shape in their gusto. They have been a great team because of their obsession with powering through the lines and ultimately through the opposition D - the heart of the defence. But it’s also what makes their attack predictable, that and their lack of left-footers.

Against Armagh, Mayo started with just two left-footers. Aidan O’Shea in the middle of the park who fists more ball than he kicks. And Fionn McDonagh.

Their other left-footers who feature regularly are attackers Kevin McLoughlin – a converted halfback – and Evan Regan.

If Mayo were a kicking team you would see a lot of their play end up on the left side of the field, but as a running team Mayo players tend to gravitate towards their more comfortable right side, even after a kick from right to left. From here they’ll look to break back into the centre, or if that’s not possible take on a shot.

In their last three matches this summer (Armagh, Down and Roscommon), Mayo have taken on 36 per cent of their shots from the right wing. They’ve converted only 15 of 31 attempts from that side, and crucially have scored only four of nine frees (and 45s) from the left-footer’s angle. Because, for the large part, they have not had a natural left-footed scorer on the field.

McLoughlin missed a last-second free to rescue a draw against Roscommon, earlier in that game he hit the post with a routine effort and he kick passed another outside of the Roscommon 45.

In the win over Down, a win owed to goalkeeper David Clarke, Conor Loftus turned down two scoreable frees from the right wing to go short.

So that’s the place to let them have the ball or foul them. Interestingly in the second half against Armagh when they kicked only one wide, Mayo managed to avoid taking a single shot from that right wing.

Against Roscommon only three of 14 shots from that side were taken by left-footers, all three were missed. Their last three shots of the match were all from that wing, again none were converted. The likes of Lee Keegan, Patrick Durcan and Diarmuid O’Connor will all have a go from the right wing, but no matter the preference this is still not the most accurate angle for a team of right-footers.

So Mayo are either running down the throat of the opposition or, if that fails, to a zone they struggle to score from. It’s little wonder they are missing so many chances.

The way to break down Galway’s blanket is with patience and width. Exposing the zonal marking by moving the ball and the angle of running. Or kicking the ball long right through the lines, first time. Both approaches go against Mayo’s instinct.

So it's clear the blockade around Galway's D forces even more play down that right side.

Kerry, or even Dublin, will come out and press with the aim of countering high up the pitch, and in doing so present Mayo with a reward for breaking lines. Galway though, they'll sit deep, frustrate, welcome them in and turn them over. This Galway team was constructed to thwart Mayo – or allow them to thwart themselves – it’s what they do.

Mayo will keep going for that punching run or dink pass, or veer right and shoot. And probably miss. Changing everything though, might beat Galway, but who is closer to winning an All-Ireland?

Since the defeat to Roscommon in the Connacht final much of the criticism aimed towards the Galway management has been for the lack of Corofin players seeing action. Corofin have won the last two All-Ireland club championships, three of the last five, and the last six consecutive county titles. However, Liam Silke and All-Star corner forward Ian Burke were the only starters against the Rossies and Burke was taken off with the game in the boiling pot. Martin Farragher and Kieran Molloy were only brought on in the dying stages.

Galway, though, have used as many of their All-Ireland club winners as any other county in their position since Antrim in 2010, when St Gall’s were reigning club champions. So far this summer Galway have started four Corofin players – Bernard Power, Silke, Molloy and Burke – while Farragher has also made two substitute appearances.

A year earlier when Corofin were also champions only Burke and Molloy featured, the latter as a substitute in one match.

Dr Crokes won the club title in 2017 with Johnny Buckley and Fionn Fitzgerald both going on to make starts for the Kingdom. In 2016 Michael Dara Macauley was the only Ballyboden St Enda’s player to feature for the Dubs in the championship as they won Sam Maguire.

In 2015 it was Corofin again and they had four starters once more – Tom Healy, Silke, Gary Sice and Michael Lundy – and 12 months earlier Diarmuid Connolly was the only player on a vastly talented St Vincent’s team to make a championship appearance for Dublin. When St Brigid’s beat Ballymun in the 2013 final, Roscommon were a Division Three team but still only three players featured for the county side in a forgetful campaign.

Crossmaglen completed a double of their own in 2012, but only Aaron Kernan, Jamie Clarke and Johnny Hanratty wore the orange of Armagh that summer. While a year before that they had five; the same trio were joined by Tony Kernan and Paul Hearty.

The performances of the Antrim footballers tend to coincide with the availability of the St Gall’s contingent, but after they won the club All-Ireland in 2010 eight players featured for Antrim (seven started) and they still went out in the first round of qualifiers.

While back in 2009 the current Dublin club champions, Kilmacud Crokes went on to lift silverware on St Patrick's day too. Paul Griffin, Rory O’Carroll, Darren Magee and Mark Davoren all started matches for Dublin that season, while Cian O’Sullivan and Pat Burke came off the bench.

So in 10 summers – starting from 2018-2009 rather than this uncompleted season – only twice have more club winners played for their county in the same year’s championship than Corofin/Galway in 2019. Of those 10 winners, their county team has exited the championship in the qualifiers on five occasions, and three of them never won a single championship game. The other five all went on and won provincial silverware. Galway will hope to end that trend in Saturday’s round four qualifier.

The reason for the lack of club winners filtering through to county squads?

Often promising players are actually denied the chance of nailing down a place on their county panel or team, during the pre-season and league, by their extended club commitments. And this early part of the season is growing in importance, year on year, for intercounty set-ups.

So while Galway’s performances this summer have been hard to watch, on this matter Kevin Walsh deserves to be cut a break.

He’ll know a win against Mayo is a lot more likely to lift the gloom than any explanation, though. And unless Mayo have a hidden hand to show, that looks on the cards. Again.