Too many ghosts haunt our mental health service 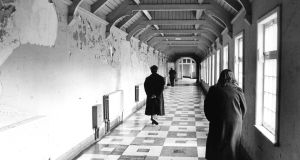 Recent comments by US president Donald Trump linking gun violence to mental illness, and suggesting that he wants to reopen mental institutions across the country, are a stark reminder of how, even today, ignorance is still stigmatising and dehumanising the mentally ill.

To modernise our approach to mental health services, we must first modernise our attitudes, and that applies to us here in Ireland, just as much as it does in the United States. We must acknowledge here that it was not clinical need but a particular attitude to mental illness that led to the building of so many “asylums”. By 1900, approximately 21,000 people – 0.5 per cent of the population of the 32 counties of Ireland – were accommodated in district asylums. No wonder outsiders talked of the “mad Irish”.

Trinity professor and consultant psychiatrist Brendan Kelly crystallised the facts when he wrote: “In reality it was poverty, bad laws and vested interests” which supplied the inmates that filled these buildings. As late as the 1960s, up to 20,000 Irish people remained locked behind the high walls of asylums as Ireland dumped its social problems and hid away those who did not “fit in”.

Mental healthcare has struggled to shake off this custodial cloak ever since. The hard work of pioneering mental health professionals and health service managers since the 1960s ultimately helped close many asylums and created the foundations for modern therapeutic community care. The vast majority of mental health treatment now occurs in the community. Most of our 2,770 inpatient beds are now in or near a general hospital, as opposed to behind grey forbidding walls.

Regulation can drive the movement towards a more enlightened approach, but it is the mental health professionals, administrators and politicians who have the power to finally close the door on the lingering legacy of asylums and move Ireland fully to a person-centred, rights-based approach.

Most of our 2,770 inpatient beds are now in or near a general hospital, as opposed to behind grey forbidding walls

We have a history of isolating vulnerable people. To some extent this is still happening. Just a few months ago the Mental Health Commission prosecuted a Kilkenny hospital for unlawfully secluding vulnerable and ill people in a smelly, dirty room. We wanted to ensure that people were safeguarded and protected, but also to send out a clear message that, where any seclusion or restraint occurs, it must be a last resort and in accordance with the law.

Recently, children’s charity Barnardos reminded us again of the growing number of children on waiting lists for vital mental health services. In children’s mental health services, an enlightened attitude is vital. These are not simply children with behavioural problems who need to be “managed”. They are vulnerable young people who, with the right intervention, can recover and become healthy adults participating in society.

The legacy of the old asylums was also noticeable for many years in our inpatient buildings. Some premises are no longer suitable for modern mental health care. The State has now recognised the need to invest. We now have modern well-designed units in most counties, while plans are well advanced to close the last of the very old institutions in Monaghan, Sligo and the Central Mental Hospital in Dublin.

However, even in modern buildings, significant practices of the past can exist. In a small number of services, there is systemic and consistent overcrowding, a lack of care planning and a lack of governance and management to ensure premises are clean and well-run. The reports of the Inspector of Mental Health Services are published so that the public can see the reality of inpatient mental healthcare.

As the philosopher John Locke wrote: “The end of law is not to abolish or restrain, but to preserve and enlarge freedom.” In Ireland, the process of reform of our mental health laws has commenced, and the Government is currently preparing a new Mental Health Bill. The law will need to set out how, when and where we treat children and young adults; and also ensure that community services are adequately regulated as this is where people want to receive care. We must also ensure that our system is prepared for new modern challenges such as the scourge of illegal potent drugs.

Ireland’s not-too-distant past bears witness to a society unwilling to question its own comfortable certainties out of a fear that those beliefs might turn out to have been built on sand. Ultimately, change will be driven by enlightened attitudes from mental health professionals, administrators, politicians and the public.

John Farrelly is the chief executive of the Mental Health Commission