Dear Paddy. Thank you for your vile, racist, sexist letter 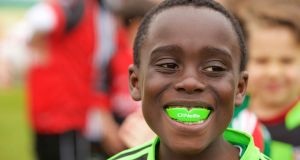 The Get Involved event at Ballyhaunis GAA club aimed to foster respect for different cultures and avoid ghettoisation and hate crime in the future. Paddy, the racist letter writer, said he would be giving the town “a very wide berth”. Photograph: Keith Heneghan

He hopes I will be gang-raped by men from another country. Paddy from D7, the only identification provided in his hand-written letter to me, expressed his vile, misogynistic and racist sentiments in response to an opinion article I wrote earlier this year.

Paddy used hate-filled terms that I won’t reproduce here and, for good measure, he included a lewd racist stereotype.

My article had called for a “mature and informed” debate in Ireland about the refugee crisis. In it I advocated devising and implementing policies of ethical migration and integration policies in an Ireland where about 12 per cent of the population – more than half a million people – were born outside the country.

I want to thank Paddy for reinforcing my case about the pressing necessity for such a debate. “Mature and informed” does not mean sending anonymous letters that amount to hate crime, illustrating that racism and xenophobia often go hand in hand with misogyny.

Mature and informed means creating an atmosphere where we can discuss how to best respond to migrants and new communities who, I would like to remind Paddy, are people. They include many men, women and children who have fled unimaginable wars, horrors and deprivation far removed from the relative comfort of many residents of Dublin 7.

Paddy’s hope that I should be gang-raped was the sixth and final point he made in his letter.

His first point was that he was “horrified to read that we have been invaded by foreigners”. I don’t know a lot about the origins and lives of those people (and I doubt Paddy does either) but I suspect many are well-integrated into the communities where they are living. Many are working and making a positive contribution to their adopted country. Some, of course, may not be ideal members of society but many native Irish are equally imperfect.

Perhaps Paddy has relatives who are living abroad or who have emigrated? Is he aware Ireland has the highest number of nationals living abroad of the 34 developed member countries of the OECD? More than 17 per cent of Irish persons aged 15 and over live overseas.

How would Paddy feel if their adopted countries described them as invaders? And how would we as a nation feel about the US, Canada or other countries had they turned away more than one million starving Irish people in the 1840s, many of whom did not survive the journey across the Atlantic on “coffin ships”?

Paddy’s second point was: “I will give Ballyhaunis a very wide berth. Awful!” That was a reference to my welcoming the GAA’s initiative of an integration day in the Co Mayo town, more than half of whose population hail from new communities.

The integration day, organised by a local garda, Darren Conlon, was attended by a large number of children from the local direct provision centre. Conlon said the intent was to build respect for each other’s cultures in the hope of avoiding the consequences of exclusion evident in other countries, including ghettoisation.

Paddy might benefit from a conversation with Garda Conlon. In addition to asking the garda about inter-cultural respect, he might also inquire about the nature and impact of hate crime and rape.

Paddy’s third point expressed hope “the new anti-Muslim party” puts up election candidates. “I’ll vote for them,” he adds. That appears to relate to my concern about the launch of an Irish branch of Pegida (Patriotic Europeans against the Islamisation of the West).

Pegida is a European network of loosely linked groups opposed to what they refer to as the Islamisation of Europe. Its launch earlier this year met with protests from anti-racism groups. Its arrival in Ireland only underlines the pressing need for Irish politicians and all sectors of society to devise and implement ethical migration and integration policies.

In his fourth point, Paddy declares: “Like many Irish people, I’m appalled at the way our social and cultural landscapes have been subverted by the huge influx of foreigners.”

Social and cultural landscapes, I would argue, are constantly changing, often for the better. Cultures learn and gain from each other, and there is no reason why our wonderful Irish culture and traditions will be diminished by the new arrivals in our midst.

People have been on the move throughout human history. There are many reasons why the world is now experiencing the largest movements of people since the second World War and, unfortunately, European countries have contributed substantially to those.

The reasons include wars, climate change and the actions of the EU and US, including policies encouraging tax avoidance by wealthy corporations. Many refugees can accurately say to Europeans: “We are here because you were there.”

Paddy’s fifth point asserts: “Many of us feel like strangers in our own land – foreign voices everywhere!!” That shows a lack of empathy with those who arrive here, often with little or poor command of English and few resources, who have to negotiate new communities, schools, workplaces and bureaucracy in a language not their own.

Paddy is in fact reinforcing my argument that we need to discuss how best to live with each other. Unless we do so, we are in danger, as Brian Killoran of the Immigration Council of Ireland has warned, of “sleepwalking into a future of division, ghettoes and even violence”.

To Paddy’s sixth point, I have no more to say. I can only suggest he reads some of the excellent publications of organisations such as the Migrant Rights Centre and the Immigration Council of Ireland. Learn to talk to, and about, our new communities in a respectful way and research the reality and impact of rape.

Mary Carolan is Courts Correspondent. Her MA (Ethics) thesis focused on the ethics of Ireland’s migration policy and the system of direct provision

1 Ireland-Italy rugby match due to be called off over coronavirus risk
2 Girl (11) denies making up allegations of abuse by creche worker
3 Dublin man may have been stabbed to death by woman in parking space row
4 Irish in Italy on coronavirus: ‘The city is in a bit of panic – the streets are empty’
5 Bank leaked my loan request to family who tried to rip me off
Real news has value SUBSCRIBE