US president Donald Trump has said that he is willing to meet Iranian president Hassan Rouhani with 'no preconditions.' Video: The White House 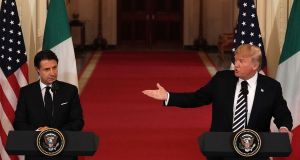 “I would meet with anybody. I believe in meeting,” Mr Trump has said at a press conference in the White House with Italian prime minister Giuseppe Conte. Photograph: Getty Images

US president Donald Trump has said he is willing to meet with Iranian president Hassan Rouhani, a little over a week after he threatened Iran’s regime with “dire consequences”.

Asked if he would be prepared to meet with Iran at a press conference with Italian prime minister Giuseppe Conte in the White House, Mr Trump said he was ready to meet “whenever they want to”, adding that there would be “no preconditions”.

“I would meet with anybody. I believe in meeting,” Mr Trump said. “I would certainly meet with Iran if they wanted to meet.”

On Tuesday morning Iran appeared to reject Mr Trump’s offer, hours after US secretary of state Mike Pompeo cast doubt on any such meeting taking place.

Hamid Aboutalebi, one of Mr Rouhani’s advisers, set his own conditions for any meeting with Mr Trump, saying “respect for the great nation of Iran”, returning to the nuclear deal and a reduction in hostilities were needed first.

In a statement on his official website on Tuesday, Mr Rouhani himself said that Mr Trump’s withdrawal from the nuclear deal was “illegal”, and that the ball was “in Europe’s court” in terms of maintaining ties with Tehran.

“The Islamic Republic has never sought tension in the region and does not want any trouble in global waterways, but it will not easily give up on its rights to export oil,” Rouhani said.

Speaking on CNBC on Monday, Mr Pompeo appeared to contrict the president’s suggestion that a meeting could take place without preconditions.

“If the Iranians demonstrate a commitment to make fundamental changes in how they treat their own people, reduce their malign behaviour, can agree that it’s worthwhile to enter in a nuclear agreement that actually prevents proliferation, then the president said he’s prepared to sit down and have a conversation with him,” he said.

Garrett Marquis, a spokesman for the president’s National Security Council, later said in a statement the US would not lift any sanctions or re-establish diplomatic and commercial relations until “there are tangible, demonstrated, and sustained shifts in Tehran’s policies”.

“Until then,” he said, “the sting of sanctions will only grow more painful if the regime does not change course.”

The prospect of a meeting between Mr Trump and the Iranian leader comes less than two months after Mr Trump met the leader of another US foe, North Korea, at a summit in Singapore.

It also suggests that the Trump administration could be considering a change in direction in its relation with Iran, having pulled out of the 2015 Iran nuclear deal earlier this year. The administration has previously said it would be open to negotiating another deal, but it is not clear what shape a new agreement could take.

“Italy has taken a very firm stance on the border, a stance a few countries have taken. And, frankly, you’re doing the right thing, in my opinion. And a lot of other countries in Europe should be doing it also. Some have taken that stance a long time ago, and they’re doing a lot better.”

Mr Trump underlined the two leaders’ similarities: “We are both outsiders to politics . . . and we’re both determined to protect the rights and needs and interests and dreams of our citizens and we will do that,” he said of the recently elected Italian leader.

While Monday marked Mr Conte’s first visit to the White House, the two leaders met at the G7 summit in Montreal in June where the newly elected Italian prime minister was the only G7 leader to back Mr Trump’s suggestion that Russia should be readmitted to the group.

The Italian leader appeared to underline that stance on Monday, saying that Italy favours dialogue between the United States and Russia as it could have “positive results” in terms of international security.

Mr Trump also reiterated his threat to shut down the federal government if he does not get funding from Congress for his proposed border wall.

“If we don’t get border security, after many, many years of talk within the United States, I would have no problem doing a shutdown,” he said. But asked if he would need the full $25 billion the White House has requested to build the wall, he replied: “I always leave room for negotiation.”

His tweet on immigration comes a day after he said he “would be willing to ‘shut down’ government if the Democrats do not give us the votes for Border Security, which includes the Wall!”.

The government is funded until the end of September, but the prospect of a shutdown before the mid-term elections is likely to rattle members of congress from both parties.

The government has already shut down twice this year – once in January, though the three-day shutdown mainly occurred over a weekend, and for a second time in February, after Senator Rand Paul blocked a spending vote in the Senate leading to a brief shutdown.

Republican lawmakers met with Mr Trump last week at the White House to discuss government funding, and there were signs after that meeting that the US president had agreed that funding for a border wall would be deferred until after November’s mid-term elections.

House speaker Paul Ryan said last week: “As far as the wall is concerned, we’ve gotten some wall funding already under way. That is being funded. But I think it’s not a question of if, it’s a question of when. And the president’s willing to be patient to make sure that we get what we need so that we can get that done, because border security’s extremely important.” – Additional reporting Guardian