Risky strategy makes Britain an outlier in the fight against coronavirus 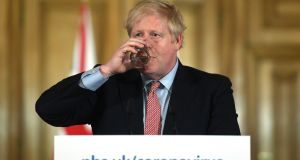 Boris Johnson’s demeanour during the coronavirus crisis has not been that of a brash populist but of a cautious, sombre politician who defers to his scientific advisers. Photograph: Facundo Arrizabalaga/ EPA/Bloomberg

Britain’s prime minister Boris Johnson announced on Friday that May’s local elections in England will be postponed until next year because of coronavirus. But education secretary Gavin Williamson said all schools should remain open unless advised to close by public health authorities. And the government’s top experts have advised against banning mass gatherings in response to the virus.

Britain’s approach to the pandemic has set it apart from its European neighbours and exposed the government to criticism from within the medical community and even from political allies. Richard Horton, editor-in-chief of the medical journal the Lancet, this week accused the government of “playing roulette with the public”. And former Conservative health secretary Jeremy Hunt has expressed concern over Britain’s failure to close schools and cancel mass gatherings.

Chief scientific adviser Patrick Vallance on Friday defended the strategy, suggesting that coronavirus is likely to become an annual virus and explaining that part of the strategy’s purpose was to build up immunity to it within the population.

“Our aim is to try and reduce the peak, broaden the peak, not suppress it completely; also, because the vast majority of people get a mild illness, to build up some kind of herd immunity so more people are immune to this disease and we reduce the transmission, at the same time we protect those who are most vulnerable to it. Those are the key things we need to do,” he told the BBC.

Flattening the peak of the virus’s spread – “squashing the sombrero” as Mr Johnson puts it – is an aim shared by public health authorities in other European countries. All governments hope that slowing it down will help to avoid health services being overwhelmed in the way that Italy’s has in recent weeks.

What sets Britain apart is its focus on developing herd immunity, something that Sir Patrick acknowledges would require most of the population to become infected.

“About 60 per cent is the sort of figure you need to get herd immunity,” he said.

The other rationale for Britain’s reluctance to take the toughest measures right away is because its experts believe the peak of the virus is 10-14 weeks away. Once the virus starts to spread more widely in the community, people over 70 could be asked to self-isolate for three months or more. Behavioural scientists advising the government warn that imposing restrictions too soon could lead to people getting bored and restless at just the moment when compliance is most necessary.

Mr Johnson’s long career as a journalist has left behind a back catalogue of provocative or embarrassing quotes that offers one for almost every occasion. Much has been made in recent days of his assertion in 2006 that the real hero of the film Jaws is the mayor.

“A gigantic fish is eating all your constituents and he decides to keep the beaches open,” he said.

“OK, in that instance he was actually wrong. But in principle, we need more politicians like the mayor – we are often the only obstacle against all the nonsense which is really a massive conspiracy against the taxpayer”.

The prime minister’s demeanour during the coronavirus crisis, however, has not been that of a brash populist but of a cautious, sombre politician who defers to his scientific advisers. And in backing a strategy that makes Britain an outlier in the fight against the virus, he has chosen the politically riskier course.

If Mr Johnson’s strategy sees the virus spreading more widely and killing more people in Britain than in neighbouring countries, the grim reckoning will be laid directly at his door.