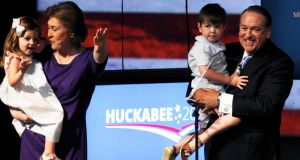 Former Arkansas governor Mike Huckabee, holding his grandson Chandler, as he formally launches his bid for the 2016 Republican presidential nomination during an event in Hope, Arkansas, on Tuesday. With Mr Huckabee is his wife Janet, holding granddaughter Scarlett. Photograph: Mike Stone/Reuters

Republican Mike Huckabee entered the race for his party’s 2016 presidential nomination on Tuesday, looking to break out from an ever-widening field by drawing on the support of social conservatives attuned to his culture-warrior message.

In a speech filled with fiery rhetoric, Mr Huckabee, a former governor of Arkansas, said that, if elected, he would change government policies to focus more on the economic plight of middle-class Americans.

He also talked tough on Islamic State, saying he would change the US approach from attempting to contain the militant group and instead would “conquer” it.

“We will deal with jihadis just like we deal with deadly snakes,” he said.

Mr Huckabee vowed strong US support for Israel and took a dim view of negotiations aimed at deterring Iran from developing a nuclear weapon.

“Hell will freeze over” before Iran got a nuclear weapon, he added.

Mr Huckabee, (59), a former host of a popular Fox News Channel program, became the sixth Republican to make a formal White House bid. He made his announcement in Hope, the small Arkansas town that he and Democrat Bill Clinton claim as their home town.

A former Baptist pastor and unabashed culture warrior, he entered the Republican field facing competition for the support of social conservatives who backed him in 2008.

Mr Huckabee became a national figure by staging an upset win in Iowa’s kickoff nominating contest during his 2008 presidential bid.

This time, other Republicans with national recognition such as Senator Ted Cruz have emerged as rivals for the role of leading crusader on social issues such as abortion rights and gay marriage.

Polls show Mr Huckabee’s support among Republican voters is in the single digits.