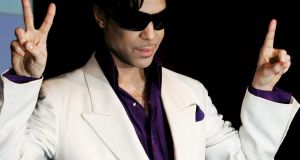 Judith Hill said Prince (above) had never revealed to her he was in pain, after decades of high-wattage performance and hip surgery. “I only know what everyone knows about his pain - I read about it,” she said. File photograph: Claire Greenway/Getty Images 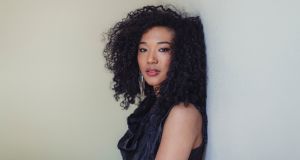 Judith Hill, a Grammy-winning artist, in Pasadena, California, June 18, 2016. For the first time, Hill recounts the moment a couple of months ago when she was on a plane with Prince and he lost consciousness in front of her. Photograph: Elizabeth Weinberg/New York Times

It’s the moment that Judith Hill has been replaying in her mind for the past two months: She was sitting on a plane with a man she loved, talking, having dinner, when suddenly he lost consciousness. She shouted his name: Prince. She shook him. But he didn’t come to.

Her swift reaction may have helped save Prince’s life that night, six days before he died of an accidental overdose of the opioid painkiller fentanyl. “His eyes fixed,” just before he nodded off across a table from her, Hill (32), recalled in an interview, speaking for the first time about her presence on the April 15th flight from Atlanta, after Prince’s two shows there.

Only one other passenger was on the private jet, Prince’s longtime friend and aide Kirk Johnson. They were bound for Paisley Park, Prince’s estate outside Minneapolis.

Over vegetables and pasta, Prince and Hill discussed his performances that night, which turned out to be his last public concerts; other musicians like funk singer Betty Davis; and photography, one of Prince’s hobbies.

According to flight-tracking reports, the chartered 1988 Dassault Falcon 900 took off at 12.51am from Hartsfield-Jackson Atlanta International Airport and was near Chicago, less than an hour from its destination, when Hill witnessed Prince fall unconscious.

If she had glanced away in that instant, down at her phone or purse, she might have thought he had simply dozed off.

“Thankfully, I happened to be looking into his face,” she said. She immediately called Johnson, who was near the front of the plane. When they couldn’t rouse Prince, they alerted the pilot, who called air traffic controllers in Chicago for help at 1.12am, reporting an unresponsive man on board.

“We knew it was only a matter of time; we had to get down,” Hill said. “We didn’t have anything on the plane to help him.”

Hill was “very freaked out”, she said, as they kept trying to wake him, shaking him and calling his name, while the plane descended. At 1.17am, it made an emergency landing in Moline, Illinois, where an ambulance met them.

Paramedics and Johnson carried Prince (57), into the vehicle, and he was revived on the tarmac with a shot of Narcan, which is typically used to treat opioid overdoses. Eighteen minutes after landing, the ambulance took him to nearby Trinity Moline Hospital.

By the time they arrived, he was awake and talking, Hill said, “which was such a relief to me, because I thought he was gone”. She had never seen anything like that happen to him and had no idea what caused his condition. Johnson’s lawyer declined to comment.

For the world, Prince’s sudden emergency landing, initially attributed to a dose of the flu but later revealed to have been related to a painkiller overdose, was the first real sign of his abrupt decline.

He was an extremely private star who had hidden his pain - and his addiction to prescription drugs to treat it - from even his inner circle.

Hill, a rising, Grammy-winning artist in her own right, was an intimate and trusted collaborator. “I was with Prince the last two years of my life,” she said.

She recorded and performed with him at Paisley Park, leaving her home near Los Angeles to spend half of most months there, and opened for him in concert, in Baltimore, Detroit and Washington.

He co-produced her 2015 debut album, Back in Time; advised her as she disentangled herself from a major-label record contract; and was helping plan her tour.

When Prince introduced Hill to an audience at a private Paisley Park event in March 2015, he announced: “Ask your questions now. She’s going to be a superstar, and you won’t be able to talk to her,” according to the Star Tribune.

He even arranged for her album to be sold at the Minneapolis record shop Electric Fetus.

“He asked that we treat her album like we would treat his,” said Jim Novak, the store’s music buyer, who had known Hill to be around town regularly. She was photographed at the small, private memorial gathering of family and friends there for Prince.

‘I was leaning on him’

She is leaning on his lessons still, she said, as she begins a short east coast tour this week, with a show at the Highline Ballroom in Manhattan on Wednesday. “He was such a warrior, and it’s inspiring me to be that person,” she said.

Hill has experienced the loss of a musical superstar before: Working as a background vocalist in 2009, she was chosen to perform a duet with Michael Jackson on This Is It, his planned concert series in London.

He died less than three weeks before its start. Hill performed an emotional rendition of Heal the World with a children’s choir at his televised memorial service.

But “Michael was different”, she said in another interview late one night, after a rehearsal with her band in Pasadena, California. “I didn’t know Michael,” she continued, except “as a fan and as someone that worked for him.”

Her grief for Prince was much more personal. Asked if their connection was romantic, Hill said only: “There was a very intense relationship. I deeply cared for him.”

In a conversation not long before he died, Hill said, “He told me that he loved me and that he would always be there for me.”

Her parents, also musicians, met him in January, when they went to Paisley Park and performed alongside their daughter, in a bill with Morris Day and the Time.

Hill’s father, bassist Robert Hill, known as PeeWee, and mother, keyboardist Michiko Hill, are part of her touring band, which she said had delighted Prince.

The couple had played with Sly and the Family Stone and Chaka Khan. Judith wrote her first song, a gospel number, at the age of 4.

Hill appeared on the 2013 season of The Voice, the TV singing competition, and, the same year, in the Oscar-winning documentary about back-up singers, 20 Feet from Stardom, earning a Grammy for her work.

In an interview around that time, she was asked about her dream collaborator: “Prince,” she replied. By chance, he saw the interview and called her up, soon inviting her to jam at Paisley Park.

By the winter of 2014, they were busy arranging and recording the funky, soulful album she’d written, Back in Time.

He played guitar, bass and drums, and sang. “He was my background vocalist for a lot of the songs,” she said, smiling.

While they were establishing their professional rapport, they were also creating a routine at Paisley Park, rehearsing on the soundstage into the wee hours. He made her omelettes (good) and smoothies (not so good), and beat her at Ping-Pong, often.

And “he was always dressed up, always, always”, she said, even if they were just going to the drive-through at Dairy Queen. Marcus Anderson, a horn player for Prince who also backed Hill, said Prince had held her musical sensibilities in high esteem. “He respected her opinion a lot,” he said.

She would come into the recording studio and make suggestions, which were often heeded. “That was kind of a first,” Anderson said.

Yet Hill said that Prince had never revealed to her that he was in pain, after decades of high-wattage performance and hip surgery. “I only know what everyone knows about his pain - I read about it,” she said.

In person, “he was quick on his feet. Never said anything, that this is hurting, never a sign of struggle. That’s why it’s all very shocking.”

Prince had a reputation for clean living, largely followed a vegan diet and frowned on musicians who worked with him using any recreational drugs.

But other friends have acknowledged that Prince apparently became dependent on painkillers. Investigators are looking into where he obtained the fentanyl that resulted in his death. They have not discussed whether it was legally prescribed or perhaps bought on the street or online.

Hill did not want to discuss the details of Prince’s medical treatment in Moline. It was, she said, the first time she had ever seen him in distress, and she felt overwhelmed and panicked.

He wanted to leave the hospital, but at the urging of his companions, he remained there until morning. Johnson stayed close, and Hill said she, too, was at his side, comforting him through the night.

“He wasn’t dreary or drowsy, or anything,” she said. The mood was peaceful, and Prince seemed like his old self.

“He wanted to watch Zootopia,” the animated movie. “He loved those films. I was going to pull it up on my phone. He said: ‘No, no, no, not here. We’re going to pick a special time and place to watch that.’”

Hill felt that Prince had suffered a close call, one that wouldn’t be repeated. “He was very co-operative that whole night,” she said, “serious about getting help.”

By 10:57 that same morning, the ordeal was over, and the plane took off for Paisley Park once again. Hill returned to Los Angeles soon after.

Still, Prince initially played down the hospital incident to his camp, Hill said. Worried, she helped tip off others that he was in a serious situation. Friends ultimately reached out to an addiction specialist in California, Dr Howard Kornfeld.

Prince also came around to the notion that he needed help. As he’d promised Hill, he began taking steps to heal himself. He underwent tests administered by Dr Michael Schulenberg, a local physician he had seen earlier.

Schulenberg arrived at Paisley Park with the results of some tests, officials have said, just after Prince had been declared dead.

Back in California, Hill learned the news when she woke up to texts from friends.

She drove straight to her parents’ house. “That was definitely the worst day of my life,” she said. “I couldn’t believe anything that painful could happen.”

Onstage, singing the songs they created, Hill said she would be buoyed by his creativity and his spirit in their last moments together.

In the hospital, he said, “It’s only by God’s grace that I’m even here,” she recalled. He told her: “’I had to fight for my life. I remember hearing your voices from afar and saying to myself, ‘Follow the voices, follow the voices, get back in your body, you gotta to do this.’

“And he said it was the hardest thing he’d ever done, to get back into his body like that.”