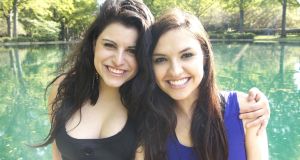 Undated handout photo of Chrissy Chambers (right) and Bria Kam as the YouTube star received substantial damages from the ex-boyfriend who put films of them having sex on a pornographic website. Photograph: Chrissy Chambers/PA Wire

A YouTube celebrity has won unprecedented damages against her ex-boyfriend after he admitted uploading “revenge pornography” videos of her to the internet.

In the first civil case of its kind to be brought in England and Wales, 26-year-old Chrissy Chambers sued her former partner for harassment, breach of confidence and misuse of private information, after learning that the Crown Prosecution Service would not bring criminal charges against him.

The terms of the settlement mean the man cannot be named, nor the amount of damages paid to Chambers disclosed, but her lawyers at the firm McAllister Olivarius say the sum is substantial.

Chambers, who is American, is one of the most popular lesbian content creators on YouTube, along with her partner, Bria Kam. The channels they run together have a million subscribers, and their comedy sketches, songs and vlogs have been viewed hundreds of millions of times.

Before she came out as gay, Chambers had a nine-month relationship with a British man when she was 18. On Wednesday, the high court heard that towards the end of their relationship he filmed seven videos of them having sex without her knowledge or informed consent.

Although it has been illegal in England since April 2015 to post private sexual images online without consent, the videos of Chambers were uploaded in 2011, meaning the criminal law did not apply. She brought the civil case in March 2016, settling out of court in December 2017.

Chambers’ victory was made public on Wednesday when a statement of the settlement was read in open court.

Her victory in the civil courts marks the end of a four-year legal battle. As well as damages, Chambers has won copyright of the videos, so she can pursue any websites that host them, and received an apology from her ex-boyfriend.