Teenager due in court over Leicester arson attack

Local belief that family were wrongly blamed for death of man 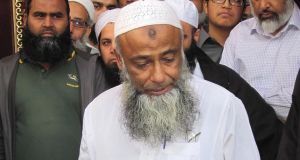 Muhammad Taufiq Al Sattar speaks following the news of the death of his family. Mr Al Sattar is a consultant in Beaumont Hospital in Dublin and two private clinics. Photograph: Matthew Cooper/PA

An 18-year-old man will appear in court today in Leicester charged with the murder of the family of a Dublin-based surgeon in an arson attack on their home last weekend.

The man was arrested on Sunday night, one of six detained in the hours after the blaze in the Wood Hill suburb of Leicester killed Shehnila Taufiq, her sons Jamal and Bilal and daughter Zainab.

The blaze at the family’s home was started just hours after a man died in hospital following an attack on a street nearby, though police are still investigating if the killings were linked. Senior Leicestershire policeman, Assistant Chief Constable Roger Bannister has ruled out any involvement by the Taufiqs in the killing of Mr Antoin Akpom, though there is a local belief that they were wrongly blamed.

Significantly, however, he went on to say: “We do not believe at this moment that either the murder of Antoin Akpom or the murders on Wood Hill are racially motivated.”

The tragic news of the deaths was broken to Ms Taufiq’s husband, Muhammed Al Sattar, who is a consultant in Beaumont Hospital in Dublin and two private clinics, in the early hours of Saturday morning.

Last evening, the Crown Prosecution Service’s Steve Chappell said they were satisfied that “there is sufficient evidence to charge” the 18-year-old and that it is in the public interest for a prosecution to take place.

Meanwhile, one man, 19-year-old Abdul Hakim from Wood Hill, has been charged with Mr Akpom’s murder, speaking only to confirm his name, date of birth and address during a five-minute hearing at Leicester Magistrates’ Court on Wednesday.