Romania in battle over its political soul as EU presidency begins 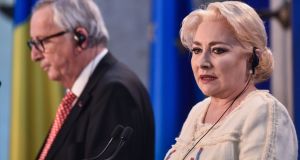 But as snow fell on anti-government, anti-corruption protesters waving EU flags outside, the optimism among politicians and diplomats inside was hardly enough to drive off the clouds that hang ominously over this troubled administration and presidency.

Social Democrat (PSD) prime minister Viorica Dancila did her best to dispel concerns in European capitals that Romania may be heading the way of Hungary and Poland in flouting basic rule-of-law provisions, not least in the “amnesty statute” to protect politicians from prosecution for corruption, which is going through parliament despite huge street protests.

The prime minister’s key rival is the country’s president, Klaus Iohannis, a member of the centre-right EPP, who made clear to journalists on Friday that he hoped the legislation would be shelved – and not just for the duration of the presidency. His insistence, backed by the courts, that he and not Dancila will represent the country at meetings of the European Council has been a major source of friction.

A defiant Iohannis is not backing off and did not shirk from criticising the government to visiting journalists, apparently revelling in the prospect of elections this year.

Dancila promised EU commissioners, and then the press, that she would see to it that Romania’s internal difficulties would not be allowed to contaminate Romania’s presidency, and EU officials suggested she had promised to put the amnesty law on hold.

But the tension was palpable at the presidency launch when former prime minister and president of the senate Calin Popescu-Tariceana fired a deeply political attack on his own state’s judicial and anti-corruption authorities, and the “current misconceptions” about his country held abroad.

Echoing the language of Viktor Orban and Poland’s Jaroslaw Kaczynski, he painted elements of the state apparatus – such as the National Anti-corruption Directorate and the intelligence services – as hangovers from communism, in effect justifying the attacks on their legitimacy.

“Some institutions and decision-makers are still holding on to the unchecked power they have previously indulged in,” he railed. “These actors have simply replaced the ideology of socialist legality with that of the rule of law, keeping their habits and claiming the same unaccountability they collectively enjoyed before 1989.”

Both he and the PSD leader and the party’s puppet master, Liviu Dragnea, have faced corruption investigations, and the latter is banned from office.

Unusually for such an occasion, European Council president Donald Tusk, who has faced similar political challenges in his native Poland, fired back with both barrels, openly encouraging the street protesters.

“To those in the European Union who might think that playing outside the agreed rules and cutting corners means strength, I say: you are wrong. It means weakness. To those working hard to defend European values, our freedoms and rights, I say: keep fighting.”

A more conciliatory European Commission president, Jean-Claude Juncker, pouring oil on troubled water, having publicly only days ago claimed in a press interview that Romania was unready to take on its first presidency, told journalists on Friday that he was persuaded that Romania’s politicians would put aside their differences for the duration of the presidency.

Observers remain to be convinced.

The commission was in town to combine celebrations of the presidency launch with discussions with the government on its busy and arduous programme for the next six months. Juncker pointed to 247 pieces of legislation proposed by the commission that are in the pipeline between the parliament and the council and that he hoped the Romanians would help to nudge to completion and approval before May’s European elections.

Some of the dossiers are particularly fraught: managing Brexit and preparatory work in the member states, brokering a deal on five less controversial migration files – the reform of the Dublin regulation will not even be attempted – and completion of important work on monetary and banking union.

Most difficult of all will be working as an honest broker to nudge forward the discussions on the hugely complicated EU future budget (MFF), notably reconciling the net contributors that do not want to pay any more to compensate for the UK’s departure, and cohesion countries such as Romania itself, which insists the union must maintain its work of equalising living standards. “Cohesion” is the Romanian presidency mantra.

And then there is ensuring that the Sibiu summit in May will be able to set out an ambitious vision for a post-Brexit EU – if, that is, the UK has left by then.