London caves in on school meals after Marcus Rashford campaign

Boris Johnson has executed a humiliating U-turn over free school meals for the poorest families in Britain over the summer, announcing a new £120 million voucher scheme after pressure from footballer Marcus Rashford. Video: Reuters 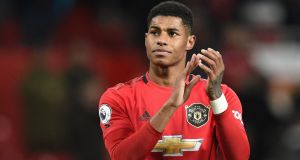 Marcus Rashford: stepped up his campaign to pressure the UK government into feeding hungry children during the school holidays. Photograph: Oli Scarff/AFP

Boris Johnson has bowed to public pressure led by a 22-year-old footballer by agreeing to give free school meal vouchers to children from low-income households during the summer holidays. About 1.2 million children will benefit from the decision, which will cost about £120 million.

The government’s U-turn followed a plea to MPs in an open letter from Manchester United and England footballer Marcus Rashford (22) who described how he had experienced hunger growing up in poverty. Mr Johnson said he had only become aware on Tuesday of Mr Rashford’s campaign, which has dominated headlines for the past two days.

“I talked to Marcus Rashford today and congratulated him on his campaign which to be honest I only became aware of very recently, today – and I thank him for what he’s done,” Mr Johnson said at a press conference in Downing Street.

I don’t even know what to say.
Just look at what we can do when we come together, THIS is England in 2020.

“This is a specific measure to reflect the unique circumstances of the pandemic. The scheme will not continue beyond the summer and those eligible will be those who already qualify for free school meals. As the PM has said, it is our intention to get all pupils back into school in September,” the prime minister’s official spokesman said.

The call to extend free school meal vouchers, which are worth £15 a week, through the summer became louder last week when the government admitted that most children would not be able to return to school until September. Ministers initially resisted it, fearing that it would be difficult to remove the entitlement next summer and in subsequent years.

Writing in the Times on Tuesday, Mr Rashford said when he was growing up, his friends would sometimes invite him to eat at their house because their parents wanted to make sure he would eat that day.

“When you next wake up and run your shower, take a second to think about parents who have had their water turned off during lockdown. When you turn on the kettle to make a cup of tea or coffee, think of those parents who have had to default on electricity bill payments just to make ends meet, having lost their jobs during the pandemic,” he wrote.

“And when you head to the fridge to grab the milk, stop and recognise that parents of at least 200,000 children across the country are waking up to empty shelves and the innocent question ‘why?’. Today nine out of 30 children in any given classroom are asking why. Why does their future not matter?”

Mr Rashford welcomed the prime minister’s U-turn on Tuesday evening, declaring that it showed what people could achieve when they came together.

“I stand proud today knowing that we have listened, and we have done what is right. There is still a long way to go but I am thankful to you all that we have given these families just one less thing to worry about tonight,” he said.