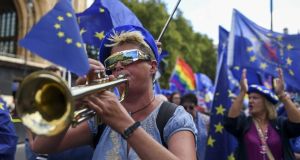 Anti-Brexit protesters near the Houses of Parliament in London. Photograph: Chris J Ratcliffe/Bloomberg

Boris Johnson, the UK prime minister, signed off on a plan to suspend the UK parliament two weeks before it was announced, dismissing the September gathering of the House of Commons as a “rigmarole”, a Scottish court heard on Tuesday.

The details of when the UK government decided to prorogue parliament came from documents submitted to a case brought by more than 70 parliamentarians in the Edinburgh court of session, who argued the five-week suspension ahead of Brexit was illegal and unconstitutional.

Speaking for the petitioners, Aidan O’Neill QC quoted documents submitted by the government as showing Mr Johnson approved the plan around August 15th by writing “Yes” on a message proposing the idea from an aide.

Mr O’Neill quoted the prime minister as writing on another document on August 16th that he did not see anything “specially shocking” about proroguing parliament from around September 9th to mid-October.

“The whole September session is a rigmarole” introduced to show the public that MPs were “earning their crust”, he quoted the prime minister as writing.

Mr Johnson’s comments will be seized on by critics as demonstrating his disregard for parliament. Mr O’Neill claimed they also contradicted claims by government lawyers that the petition was “academic, hypothetical and premature”.

The UK government has said prorogation of parliament is routine ahead of a Queen’s speech such as the one planned for October 14th. Mr Johnson also insists that the unusually lengthy prorogation will still leave parliament ample time to debate the terms of Brexit before the UK is scheduled to leave the EU on October 31st.

Acting for the UK government, David Johnston QC told the court that the decision to prorogue parliament was not one that courts could or should judge, and parliament could legislate on the issue if it chose.

“It is politics, it is high policy, it is not law,” Mr Johnston said. “Parliament is the place where ... these matters can be discussed and perhaps some resolution made.”

The petition, which is backed by the Good Law Project set up by anti-Brexit barrister Jo Maugham, is asking the court to bar Mr Johnson from suspending parliament for so long it would be impossible to block a no-deal Brexit.

“We have a prime minister who is seeking to hold office without accountability ... the better to use power without responsibility. That is not a situation that this court can permit,” Mr O’Neill said.

Mr O’Neill said there was no justification for such a long suspension and the court was entitled to draw inferences from Mr Johnson’s decision not to submit an affidavit under oath explaining his intentions. The prime minister had a record of “incontinent mendacity”, he said.

Lord Doherty is expected to issue a decision on the parliamentarians’ petition on Wednesday, with an appeal likely to be heard by the court of session’s higher inner house later this week.

Labour MPs Jess Phillips and Alex Sobel on Tuesday announced they would also seek to join Ms Miller’s challenge. An application by law firm Edwin Coe for the two MPs claims that proroguing parliament in the period leading up to the UK leaving the EU is an abuse of power and a breach of the MPs’ right to freedom of expression.

The supreme court said on Tuesday it would hear appeals to the prorogation challenges together beginning on September 17th. – Copyright The Financial Times Limited 2019

1 US supreme court rules prosecutors can obtain Donald Trump’s financial records
2 Mother and five children sleeping in car while seeking accommodation
3 Donald Trump is an amateur populist – the real trouble is yet to come
4 Six counties register no coronavirus case over past week
5 Covid-19: Small minority of pubs putting health of customers and staff ‘at risk’
Real news has value SUBSCRIBE