US alarmed by Erdogan announcement but silent on how its 2,200 troops in field will act 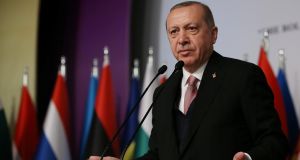 The Pentagon has warned against “unilateral military action” after Turkish president Recep Tayyip Erdogan declared Ankara would “in a few days” launch an operation to clear Syrian Kurdish fighters from territory they hold in northern Syria.

US military spokesman Sean Robertson called Mr Erdogan’s announcement a “matter of grave concern” and “unacceptable” but did not say how the US military, which has more than 2,200 troops in the area, would respond.

Turkish daily Sabah reports that the Turkish military and 15,000 fighters of the National Army – a Turkish-backed Syrian rebel force in northwest Syria – have completed preparations for an offensive against the Kurdish People’s Protection Units (YPG), branded a “terrorist” organisation by Turkey due to its ties with rebellious Turkish Kurds.

While no date has been given, the operation is expected to be conducted from both Syrian and Turkish territory, Sabah reported. “The battle will be launched simultaneously on several fronts,” said Maj Youssef Hamad of the National Army.

He said towns to be targeted would include Majbij on the western side of the Euphrates river and Tel Abyad and Ras al-Ayin on the east, along a 200km stretch of the 800km border. National Army commanders set to take part in the offensive argue the presence of US troops poses the only problem for attacking forces.

Columnist Mehmet Acet, writing in YeniSafak, an official mouthpiece, revealed the operation would open with cross-border artillery and rocket attacks from within Turkish territory. Acet said US envoy James Jeffrey was briefed on the operation during a visit to Ankara. US forces could be warned ahead of attacks in specific sectors, allowing them to deploy elsewhere.

“The idea of an operation east of Euphrates has never been off the table in security-related meetings conducted in Ankara,” Acet said.

Two US initiatives have increased Turkey’s determination to act: the recent establishment of US military posts along the border to prevent clashes between Turkish and YPG forces – in order to protect US Kurdish assets; and the announcement earlier this year that the US seeks to train and arm 35-40,000 local forces in YPG-held regions.

UK Royal United services Institute researcher Michael Stephens told the Washington-based media site al-Monitor that Turkey cannot act “without US permission or unless the US decides to vacate the area” held by the Kurds. He argued that, as the YPG remains Washington’s key force in fighting the Islamic State terror group, it is “unlikely the US would accept a Turkish operation in Syria at any time in the future”.

However, European Council on Foreign Relations fellow Asli Aydintasbas, quoted by al-Monitor stated, “Turkey has seen the Americans talk tough before but then failing to commit to [the Kurds] either politically or militarily.”

If Turkey launches its offensive, the YPG will have no option but to defend its territory. The Kurds and their Arab allies are well-armed, hardened fighters who fear ethnic cleansing, domination and annexation by Turkey, which is seen as an old enemy.

Kurdish general Mazloum Kobani asserted, “We are ready for any attack and will respond strongly within our areas. Until now our diplomatic efforts aim at deterring this.”