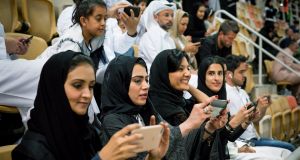 Princess Reema bint Bandar, the head of the Saudi Federation for Community Sports, third from left, at a match between local rivals Al-Ahli and Al-Batin in Jeddah, Saudi Arabia, the first soccer match women were allowed to attend at a public stadium in the country, January. 12, 2018. Photograph: Tasneem Alsultan/The New York Times

Saudi Arabia is to establish a female football league in a bid to loosen ultraconservative religious, social and cultural restrictions on girls and women and improve the kingdom’s international image.

“The launch of the [league] bolsters women’s participation in sports at the community level and will generate increased recognition for women’s sports achievements,” the official Saudi Sports for All Federation declared.

This is the latest initiative by Saudi crown prince Mohamed bin Salman in his campaign to drag the kingdom into the 21st century by granting limited freedoms to women, reopening cinemas and promoting concerts, sporting events and foreign tourism.

He aims to win over young Saudis, the majority of the population, who are impatient for social freedoms, and show the world the kingdom is changing for the better.

Saudi women have had limited access to sports over the last decade and were first permitted to attend male football matches in January 2018, although they were seated in family sections rather than in those reserved for men on their own.

Last August, the government made an inroad in the formerly sacrosanct male guardianship system by granting women of 21 and over the right to apply for a passport and travel without obtaining permission from fathers, husbands, brothers or sons. Women were also given the right to register births, marriages and divorces, which had been exercised prior to that by male guardians.

On other key issues women are still treated as minors from birth to death. They must obtain permission to marry, divorce, study abroad, secure medical treatment, and seek shelter from domestic abuse. Instead of tackling the core of male guardianship, the crown prince has focused on ending dissent.

Under a law adopted in 2017 under his watch, “terrorism” is broadly defined as disturbing public order, undermining public security, and destabilising the state or endangering national unity. Under this law, dissidents and critics are crushed and freedom of expression, peaceful assembly and association are denied.

The law mandates lengthy custody ahead of trial, heavy sentences, and wide use of the death penalty. Terrorism cases are handled by the specialised criminal court, which Amnesty International reported on February 6th is being used “as a weapon to systematically silence dissent”.

In May 2018, shortly before the long-standing ban on female drivers was lifted, women who led the campaign to attain this right were arrested, imprisoned, and, according to family members, tortured. In March last year prominent female detainees Loujain al-Hathloul, Aziza al-Yousef and seven others were brought to trial under cybercrime laws. They are accused of having contacts with foreign human rights bodies, journalists and diplomats.

The trial has been drawn out. Ms Hathloul’s last court appearance was February 12th after she was held in solitary confinement for 287 days. While several women have been released on bail, scores more women and men have been imprisoned and, according to Amnesty International and Human Rights Watch, suffered torture.

The spotlight was placed on Saudi treatment of dissidents in October 2018 when Riyadh dispatched a hit squad to the kingdom’s consulate in Istanbul to kill, dismember, and disappear Saudi journalist Jamal Khashoggi. He had written critically about Saudi affairs in the Washington Post after defecting in 2017.

Although five members of the squad were sentenced to death and three to long prison terms, the planners, including the crown prince’s aide, Saud al-Qahtani, were acquitted.

International uproar over the Khashoggi case has not deterred the kingdom from violating the rights of its citizens. In April last year, 37 political prisoners were beheaded in one day, 33 of them from the oil-rich Eastern Province, where Saudi Shias have demanded an end to discrimination and repression. During 2019, 185 prisoners were executed.