Palestinian refugees at Yarmouk are left to their fate 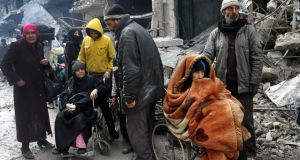 Palestinian residents of the besieged refugee camp of Yarmouk wait at the gate of the camp to receive aid supplies from the United Nations on the southern edge of the Syrian capital, Damascus. Photograph: AP Photo/SANA

If they are lucky, Ahmad and his family in the Yarmouk refugee camp will have one meal today: two plates of rice cooked with undrinkable water. Others will have to do with less, perhaps a bowl of spiced water that doubles as a form of soup that will do nothing to ease the all-too-familiar hunger pangs.

“We are being killed here, Yarmouk camp is being annihilated,” said Ahmad, a resident of the Palestinian camp just a few miles from the centre of the Syrian capital who was given a pseudonym to protect his identity.

Yarmouk, once a bustling southern suburb of Damascus of 200,000 people, has been starved for two years in a relentless siege by Bashar al-Assad’s regime, which has also blocked water supplies for months, a tactic that activists say constitutes the use of water as a tool of war.

Now the remaining 18,000 residents, many of whom suffer from ailments ranging from malnourishment to liver disease and illnesses linked to consuming tainted water, are mired on the frontline of the latest offensive by the terror group Islamic State, which has seized the majority of the camp.

“As soon as Daesh entered the camp they burned the Palestinian flag and beheaded civilians,” he said.

Activists from the camp say that between 2,000 and 4,000 residents have fled, seeking refuge in nearby villages such as Yalda, Babila and Beit Sahem in the Damascus countryside, but those who stayed inside face a grim future.

Food prices have rocketed, with a loaf of bread costing more than $10. Malnourished residents have to walk miles to buy them on the road to Yalda, whose residents are benefiting from a local ceasefire deal between the regime and the opposition. But most residents choose instead to remain in their homes to avoid being killed in the crossfire of clashes, snipers or barrel bombs.

Nearly 200 people are believed to have died in Yarmouk in 2014 due to hunger. Medical supplies are also badly needed, with a lack of equipment, antibiotics and painkillers to treat the wounded, said Salim Salamah, head of the Palestinian League for Human Rights-Syria and a former Yarmouk resident.

“After Daesh entered, the situation worsened because they stole the remaining medical supplies and [there was an] increase in the arbitrary bombings with mortars, rockets and barrel bombs,” said Sameh Hammam, the pseudonym of an activist who fled to the camp’s outskirts in the latest assault.

There are only two hospitals in the camp, with a tiny number of doctors. One of them, the Palestine hospital, was hit with a regime barrel bomb on Thursday, activists said.

But beyond the humanitarian crisis, many Palestinians from Yarmouk feel abandoned by the Arab world and the international community at large, bridling at the lack of concern for residents who endured two years of siege. Thousands of their compatriots had fled in the past, including to neighbouring Lebanon, where they have extremely limited rights.

Many have perished as they tried to take the journey by boat to Europe, and some have secured homes in exile through resettlement in places such as Sweden, Denmark and Germany.

“There’s a serious crisis of morality and humanity about what’s going on in Syria, from north to south, not only in Yarmouk,” he said.

A Palestinian academic who visited Yarmouk six months ago on a humanitarian mission said some locals were reduced to consuming water mixed with spices, adding the Palestinians were paying the price “of struggles that they are not a part of”.

“I’m not just angry but indignant at this frightening silence,” he said. “Decisions are taken at the [UN] security council that are worthless and not enforced. The whole world is lying to us.

“I think sometimes that we do not belong to this world, that the Palestinian people are not part of humanity,” he added. “I don’t think there’s a light for the Palestinians at the end of the tunnel, except if the tunnel leads to Stockholm or Berlin.”

He said that the Palestinians now needed a saviour or messiah, one who could save them from being deprived of even the basic necessity of existence.

“Is there anything worse than dying of hunger?” he asked.