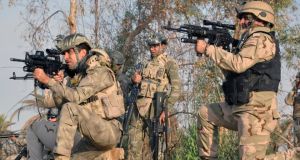 Iraqi security forces take up position during an intensive security deployment against Islamic State militants on the outskirts of Diyala province. Photograph: Reuters

The bodies of 150 members of an Iraqi Sunni tribe which fought Islamic State have been found in a mass grave, security officials said today.

Islamic State militants took the men from their villages to the city of Ramadi and killed and buried them last night, an official in a police operations centre said.

In a separate case, witnesses said they found 70 corpses from the same Albu Nimr tribe near the town of Hit in the Sunni heartland Anbar province.

Security officials there were not immediately available for comment.

Most of the victims found near Hit were members of the police or an anti-Islamic State Sunni force called Sahwa (Awakening).

“Early this morning we found those corpses and we have been told by some Islamic State militants that ‘those people are from Sahwa, who fought your brothers the Islamic State, and this is the punishment of anybody fighting Islamic State’,” an eyewitness said.

Tribal sheikhs from Albu Nimr say both sets of victims were among more than 300 men aged between 18 and 55 who were seized by Islamic State this week.

Iraq’s Shi’ite-led government wants Sunni tribal leaders to back the armed forces in the war against Islamic State militants who are notorious for beheading or executing anyone opposed to their radical ideology.