Dozens killed in Baghdad as Islamic State ramps up campaign 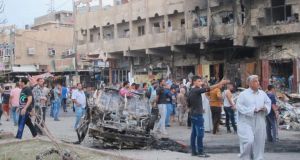 People gather at the site of a car bomb attack in Baghdad yesterday. The latest attacks follow a series of dramatic advances in Iraq by Islamic State fighters. Photograph: Reuters

Mursitpinar and Islamic State militants have targeted Baghdad with a wave of devastating car bombs and mortar attacks, killing at least 150 people since Sunday in an escalating campaign of violence and mayhem.

In the eastern suburb of Talibiyah, a suicide bomber rammed his car into a police checkpoint, killing at least 12 people. The dead included seven policemen and five civilians.

In recent weeks the jihadists have taken control of the city of Hit and have attacked the provincial capital of Ramadi, 70 miles west of Baghdad. Iraqi government troops have fallen back to an air base in the desert outside Hit.

The IS has comprehensively consolidated its grip on the Sunni area, which borders Syria, Jordan, Saudi Arabia and the governorate of Baghdad.

Its fighters, now encamped on the outskirts of the capital, appear to be able to target important installations with relative ease. Earlier this month four mortar shells rocked the Green Zone in the heart of Baghdad, home to the US embassy and numerous government buildings.

The jihadists have also fired off mortars at the Shia northern district of Kadhimiya. On Tuesday night they succeeded in killing a member of parliament.

Western observers say the IS is putting pressure on the government of Haider al-Abadi, Iraq’s new prime minister. But they don’t believe Baghdad is in imminent danger of falling.

The IS, he said, “has strategy and it has tactics. The strategy is to take Baghdad. The tactic is to press on the weakest spots.”

After capturing Mosul, Iraq’s second city, and others areas in early summer, IS fighters surged towards the capital. They paused in July and August when the Iraqi army and Shia militias staged a concerted fightback.

Fighting continued in the northern Syrian town of Kobani, where Kurdish units said there was little sign of an IS retreat. Some reports said the jihadists had abandoned parts of the territory it occupied after taking heavy casualties.

Speaking from inside Kobani, Ismet Sheikh Hasan, a commander with the main Kurdish militia defending the town, said: “On Wednesday night they started again, coming at us with a lot of strength. Whoever said Isis is retreating is wrong.” – (Guardian service)