Violence getting ‘out of hand’ at German refugee centres 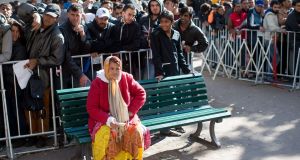 There is a risk of violence among asylum seekers getting out of hand at accommodation centres in Germany, the country’s police union chief said on Friday in remarks reflecting growing concern over a record refugee influx.

More than 200,000 migrants are estimated to have arrived in Germany in September alone - roughly the same as for the whole of last year - and the government estimates that 800,000 or more could come over the course of 2015.

More than 500,000 migrants have reached the European Union so far this year, many fleeing war in the Middle East and Africa and others pursuing a better life in the affluent EU, with Germany and Sweden among the most favoured destinations.

“We’re running the risk that the situation in refugee accommodation will get out of control,” police union chief Rainer Wendt told the mass-circulation newspaper Bild.

“Our experience suggests that in many places there are, unfortunately, very targeted and well-prepared violent clashes with ethnic or religious motivations almost every day.”

German police arrested 15 asylum seekers on Tuesday suspected of being involved in a fight at their hostel in Suhl, in the eastern state of Thuringia, which left 11 people hurt, local broadcaster MDR reported.

Interior Minister Thomas de Maiziere has also warned about violence in asylum-seeker centres. Speaking on broadcaster ZDF on Thursday, he said that while refugees were thankful to be in Germany until recently, that had changed for some now.

“That’s still a minority at the moment but we have to say clearly that whoever comes to Germany ... must allow themselves to be distributed to wherever we send them, take part in a fair process and respect our legal system.”

Chancellor Angela Merkel’s popularity has slumped to its lowest level in nearly four years, a sign of the public’s cooling attitude towards the refugee wave.

She was initially celebrated at home and abroad for her welcoming approach to the refugees. But as the flow has continued and German facilities have been stretched to the limit, she has come under increasing criticism.