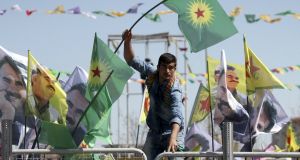 A demonstrator waves a flag of the outlawed Kurdistan Workers Party (PKK) during a gathering to celebrate the spring festival of Newroz in the Kurdish-dominated southeastern city of Diyarbakir, Turkey, earlier in March. File photograph: Sertac Kayar/Reuters

Mr Erdogan said 355 soldiers, police officers and village guards have been killed in the violence, most of it in Turkey’s largely Kurdish southeast. Anadolu cited the text of a speech by Mr Erdogan to the Turkish War Academy.

A local elected official was killed in the strife-hit southeast on Monday after a weekend of violence that also claimed the lives of almost 30 militants and soldiers, according to security sources.

Ibrahim Inco, the village leader in Sarioren in Sanliurfa province, was shot after suspected PKK militants hijacked his car, the sources said.

They were fleeing after detonating an explosive targeting a military vehicle. Three soldiers were hurt in the explosion, the sources said.

It was the latest violence in southeastern Turkey after the PKK abandoned its two-year ceasefire in July. Months of clashes have ensued, making it one of the deadliest periods in the insurgency’s 31 years.

The military said 25 PKK militants were killed in the towns of Nusaybin, Sirnak and Yuksekova in clashes at the weekend.

On Sunday, two soldiers were killed and seven wounded in Nusaybin, a city on the Syrian border, when militants detonated explosives in a building which security forces were searching, security sources said. Five soldiers were wounded.

In a separate incident in Nusaybin, which has been under a round-the-clock curfew since March 14th, a soldier was killed by sniper fire and a police officer was killed in a bomb attack.

Nusaybin is the latest city undergoing security operations as the military tries to root out PKK militants from urban centres where they have erected barricades and dug trenches. The military has also launched dozens of air strikes against PKK bases in northern Iraq.

The opposition Peoples’ Democratic Party (HDP), which dominates much of the Kurdish vote, says hundreds of civilians have been killed in the military operations which were stepped up in December.