The Irish Times and the cartoons 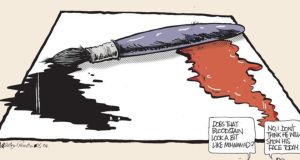 A drawing by Irish Times Cartoonist Martyn Turner in response to Wednesday’s attack on Charlie Hebdo.

The threats to Jyllands Posten, the Danish newspaper which first got into trouble back in 2006 for publishing depictions of the Prophet Muhammad, prompted a furious debate in the international media about how it should be defended. Should newspapers which unanimously strongly asserted the Danish paper’s right to publish such material show their solidarity and defiance of Islamist threats by republishing the cartoons even though they accepted they were deeply offensive to wide sections of the Muslim community?

At the time The Irish Times, along with most of the press, decided it would not do so, and its decision stands in relation to Charlie Hebdo’s representations of the prophet, including the front page of the issue to be published on Wednesday.

The Irish Times took the view that publication of the cartoons was likely to be seen by Muslims as gratuitously offensive and would not contribute significantly to advancing or clarifying the debate on the freedom of the press.

The “right to offend”, an essential corollary of the right to freedom of expression, could be defended and upheld, The Irish Times holds, by other means than causing further offence to the overwhelming majority of a community which deplored the threats to Jyllands Posten and the attack on Charlie Hebdo.

The Irish Times unequivocally and unapologetically defends the right of Charlie Hebdo to publish, and regards the attack on the magazine as an outrageous attack on the freedom of press. The Irish Times welcomes the French government’s commitment to help the magazine financially and expresses its solidarity with the brave band of journalists who are determined to keep the title afloat.