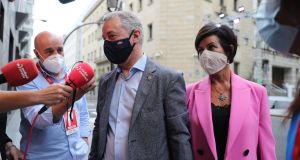 His conservative Popular Party (PP) won the regional election convincingly, confirming its dominance in the northwestern region. The result meant a fourth parliamentary majority in a row for the PP’s candidate there, Alberto Núñez Feijóo.

That is where the problem lies for Mr Casado. Mr Feijóo, who has been president of Galicia since 2009 and is often touted as a national party leader-in-waiting, is the most powerful moderate voice in the PP. His approach contrasts with the confrontational style of Mr Casado, whose hostility towards the leftist government led by Pedro Sánchez reached a new pitch during the recent Covid-19 healthcare crisis.

El País suggested that this election sent a “potent message” to Mr Casado. “Feijóo’s results, achieved through restraint and the centre ground, reflect the error of judgment of [Mr Casado’s] current hardline strategy,” the newspaper noted.

The result of the other regional election held at the weekend, in the Basque Country, reinforces this view. Running on an aggressively unionist joint ticket with Ciudadanos, the PP secured four seats fewer than it managed on its own four years ago.

Meanwhile, the far-right Vox gained its first seat in the Basque parliament.

However, it can be notoriously difficult to draw national conclusions from Galicia and the Basque Country, which have their own political microclimates.

In both regions, nationalist parties performed strongly. In the northwest, the Galician Nationalist Bloc (BNG) more than tripled its share of seats to establish itself as the region’s pre-eminent leftist force. In the process it leapfrogged the Socialists and left the Podemos-led Galicia en Común without parliamentary representation.

In the Basque Country, the Basque Nationalist Party (PNV), which has dominated the region in the democratic era, was once again the clear winner. With the more stridently pro-independence EH Bildu in second place with its best-ever performance, more than two-thirds of the Basque parliament’s seats are now in the hands of nationalists.

However, the success of these parties – particularly the BNG and EH Bildu – can be attributed more to their social agenda than to the sovereignty issue, which has rarely featured in public debate in either region recently. Efforts to restore the Covid-ravaged Spanish economy to health in the coming months will ensure that remains the case, at least in the short term.

Much of the success of the BNG and EH Bildu appears to have come at the expense of Podemos, which also suffered substantial losses in the Basque Country.

The party’s leader, Pablo Iglesias, described the two results as “an unmitigated defeat”. Podemos is the junior coalition partner to Mr Sánchez’s Socialists in the national government, a status which can be electorally perilous.

Despite the tensions of the last four months in Spain there was little shift for the Socialists, who were left disappointed after making only marginal gains in both ballots. They are expected to continue supporting the PNV-led government in the Basque Country, a reciprocal arrangement that should offer some stability in Madrid for Mr Sánchez’s national administration.