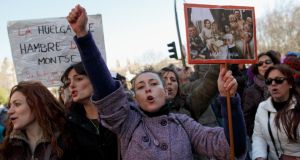 The pro-choice march in Madrid which features in the film. Photograph: Pablo Blazquez Dominguez/Getty Images

There aren’t many films that do not seek to turn a profit and which are available to view online for free the day after opening nationwide. But for the makers of a new documentary about the campaign against Spanish government plans to introduce stricter abortion legislation, these are desperate times.

Yo decido. El tren de la libertad (“I Decide. The Freedom Train”) opened yesterday in cinemas, cafes and cultural centres across Spain and entrance was free of charge. Today it can be seen on the internet.

It has been made by a collective of nearly 80 female film-makers, who aim to contribute to a cause they feel is “just and urgent: to ensure that neither in Spain nor in any other country the rights of women to decide freely regarding their bodies and sexuality are pushed back or renegotiated”.

The conservative government of Mariano Rajoy unveiled the main lines of the new abortion Bill in December. It seeks to make voluntary terminations less accessible, only allowing them under certain circumstances: if the pregnancy is the result of a rape, or if the health of the mother is threatened.

The bill is yet to go to Congress, although the governing Popular Party’s majority is likely to ensure it is approved, probably some time this winter. Recent reports that the bill is being amended to allow abortions also when the foetus is malformed have failed to satisfy its critics.

Much of the documentary Yo decido. El tren de la libertad revolves around a massive demonstration held against the law on February 1st in Madrid, where tens of thousands of protesters converged from around Spain and abroad. Many travelled from the north of Spain on the so-called “freedom train” which gives the film its name.

The film’s creators, who call themselves the Collective of Women Film-makers against the Reform to the Abortion Law, shared directorial and production duties and received a helping hand from Pedro Almodóvar, who lent them his editing studio.

Among the many opinions given during it is that of the well-known writer Rosa Montero, who says that the new law will “put us, within the EU, alongside only Ireland, Poland and Malta”.

The film has faced some obstacles in its distribution, according to the film-makers. Some venues have refused to screen it or offered excuses as to why they can’t show it. eltrendelalibertadfilm.blogspot.com.es