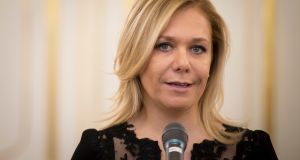 Newly appointed Slovak interior minister Denisa Sakova: said after being sworn in that she “will try to restore public trust in police that is currently missing”. Photograph: Vladimir Simicek/AFP/Getty Images

Slovakia’s president Andrej Kiska and anti-government protesters have criticised the appointment of a ruling party insider as interior minister, amid demands for impartial investigations into corruption and the murder of a reporter.

Denisa Sakova on Thursday became the third person to serve as Slovakia’s interior minister since February, when journalist Jan Kuciak and his girlfriend Martina Kusnirova were shot dead, plunging the country into political crisis.

Ms Sakova was a deputy to Robert Kalinak, who reluctantly resigned as interior minister in March. His successor, Tomas Drucker, stepped down earlier this month having failed to restore public confidence in the work of the ministry or Slovak police chief Tibor Gaspar, who subsequently quit last week.

The double murder shocked Slovakia and triggered major street protests calling for independent inquiries into the killings and the links that Mr Kuciak uncovered between alleged mafia figures and members of the ruling Smer party.

Critics of Ms Sakova say she is too close to leaders of Smer, which has run Slovakia for 10 of the last 12 years, and in particular Mr Kalinak and other current or former interior ministry officials, where she has worked for many years.

Mr Kiska said he did not have the constitutional power to block Ms Sakova’s appointment, but he told prime minister Peter Pellegrini that it was “a wasted opportunity”.

“After a number of unexplained allegations of links between the mafia and top politicians, I think it’s unacceptable to ignore public calls for reforms of the interior ministry and police, including fundamental and convincing personnel changes,” Mr Kiska wrote on Facebook.

“The ruling majority still hasn’t understood what really happened in Slovakia after the murder of Jan Kuciak and Martina Kusnirova,” he added.

“It hasn’t understood that people’s already meagre trust in the willingness and ability of our state to ensure security and justice has totally crumbled . . . People are waiting for a clear signal of its readiness to change its style of governance. I do not consider this nomination for interior minister to be such a signal.”

Mr Pellegrini insists that Ms Sakova’s experience will help her succeed as interior minister, and she said after being sworn in that she “will try to restore public trust in police that is currently missing”.

A small group of people protested in Bratislava against her appointment, which they said “made a mockery of tens of thousands of people across the whole of Slovakia, who are demanding a decent and just Slovakia”.

Street protests are set to continue, as Slovaks demand action on high-level corruption cases and arrests over the murder of Mr Kuciak and Ms Kusnirova, who were both 27. The EU anti-fraud unit, Olaf, is now looking into alleged EU farm subsidy scams in eastern Slovakia that Mr Kuciak investigated.