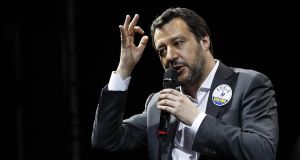 Northern League leader Matteo Salvini: Could end up in a position of power, either as interior minister or even prime minister – a scenario that could disturb investors and EU policymakers. Photograph: Riccardo Antimiani/EPA

Just after the start of one of his final campaign rallies this week, Matteo Salvini lunged into the kind of provocative anti-Muslim pitch to voters that has fuelled his rise in Italian politics.

The leader of the Northern League said he had lost weight while hunting for votes around the country, so would be eating “six kilos of polenta with ossobuco” that night. “I won’t say salami or pork because some may get offended. Long live sausage! Long live salami! Long live pork, coppa and pancetta,” he told a cheering crowd in the northeastern city of Padua.

After the quip about Muslim pork consumption, he became serious on his plans to rid Italy of illegal immigrants. “Guys, we have imported a few good people,” Salvini said. “But there has also been a tide of delinquents and I want to send them home, from the first to the last. We are packed with drug dealers, rapists, burglars – and the League is the solution.”

Italians vote on Sunday in a poll with the potential to cement the EU’s economic recovery and political stability – or undermine it. Immigration, along with the weak economy, has dominated the campaign.

Salvini, a 44-year-old former communist from Milan, has forced a political shift towards hardline positions reminiscent of President Donald Trump in the US and Viktor Orban, Hungary’s prime minister, after Italy absorbed more than 630,000 migrants from across the Mediterranean over the past four years.

A similar trend was observed in the French, Dutch and even German elections of 2017, in which a populist threat forced mainstream centrist parties to harden their stance on immigration.

“Part of the country is worried, alarmed, unhappy – and if there’s a political figure able to ride that wave it’s Salvini, and others have had to fall in line behind him,” says Giovanni Orsina, a political science professor at Luiss university in Rome.

In Italy, Silvio Berlusconi, the 81-year-old media mogul and Salvini’s centre-right coalition partner, has called for the deportation of illegal immigrants, while the anti-establishment Five Star Movement called for a crackdown on charities rescuing migrants from the sea. Meanwhile, the ruling centre-left Democratic party struck a contentious deal with Libyan authorities to keep migrants in north Africa to contain the public backlash.

“I read everyone else’s platforms and they are our own,” says Susanna Ceccardi, the Northern League mayor of Cascina, a town in Tuscany. “We have imposed our political agenda with the line dictated by Salvini. The League has already won.”

In the final polls before a 15-day blackout the Northern League was garnering the support of about 14 per cent of voters – a big rise compared with the 2013 general election, when the party won 4 per cent.

If the centre-right coalition led by Berlusconi wins a majority of seats, Salvini could end up in a position of power, either as interior minister or even prime minister – a scenario that could disturb investors and EU policymakers. If he ends up in opposition, agitating against whatever centrist coalition emerges, he will almost certainly have a bigger army of MPs.

Political analysts in Rome say Salvini has run the election’s most energetic campaign. “Salvini has really toured Italy, he really made an effort – even in areas in the south where the League has had a presence only recently,” says Marco Sonsini, an analyst at Telos A & S.

By contrast Berlusconi has appeared mostly on television and radio. Matteo Renzi, the Democratic party leader, has held fewer events – and generally in leading cities. Among the four top parties, Salvini’s verve is possibly only matched by Luigi Di Maio, the 31-year-leader of the anti-establishment Five Star Movement, who has, however, adopted a softer tone and sought to reassure voters.

Salvini’s fiery language may prove too extreme for moderate conservative Italian voters. Last Saturday, in an attempt to cast himself as a defender of Europe’s Christian values, he brought a rosary to an event in Milan and waved a copy of the Gospels as he vowed loyalty to Italy’s 60m people. Catholic officials rebuked the stunt: Pope Francis has been a staunch defender of migrant rights.

Other views held by Salvini also seem outside the Italian mainstream, including a vow to take the country out of the euro. While Italians have grown more Eurosceptic, most are not prepared to ditch the single currency – and that forced Salvini to tone down his rhetoric. “Salvini will not blow up the European monetary system,” he said in September.

On foreign policy, he has advocated for the EU to drop sanctions on Russia and nurtured close ties with Vladimir Putin’s party. His views on North Korea have been unorthodox, including a plan to abandon the trade embargo on Kim Jong-un as well as an appreciation for aspects of its totalitarian society.

“I saw a splendid sense of community,” he told Corriere della Sera in 2014 after returning from a trip to Pyongyang. “There are many children playing in the streets, and not with their PlayStations. There is a lot of respect for the elderly. These things don’t happen in Italy any more.”

Salvini has also embraced a protectionist attitude, reflecting growing popular angst over globalisation, even though Italy has a trade surplus and companies that rely increasingly on exports. “Renzi can give his own kids wine made without grapes, Tunisian oil, Moroccan oranges, Canadian wheat and Polish milk,” Salvini told the crowd in Padua. “We prefer products from our own land.”

But it is immigration that Salvini keeps coming back to – which takes on a darker tone, given Italy’s past history of being under the Fascist regime.

Whereas the Northern League has historically been staunchly anti-Fascist because of an aversion to a centralised, authoritarian Italian state, Salvini has courted votes from the neo-Fascist far right. This week he suggested he could talk to CasaPound, the neo-Fascist group, about being in government together if it were to overcome the 3 per cent threshold for representation in parliament. He has dismissed growing concern over the rise of neo-Fascism in Italy as a distraction.

To critics, Salvini’s style and xenophobic messages have brought an ugly – and deeply troubling – tone to the Italian election. But to his fans, he is simply the contender with the clearest mission. “He’s humble, simple, he likes to fish, he’s not snobbish,” says Ceccardi. “His idea is to restore dignity to the Italian people.” – Copyright The Financial Times Limited 2018