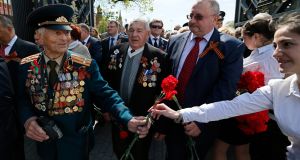 Russian second World War veterans after laying flowers at the Tomb of Unknown Soldier outside the Kremlin, in Moscow, on Thursday. Russia marks the 69th anniversary of the victory over Nazi Germanyin WWII on 09 May , on Friday. Photograph: Yuri Kochetkov/EPA

As Russia prepares to celebrate Victory Day today, an army of volunteers has set forth to distribute the ribbon of Saint George, a symbol of the Soviet Union’s defeat of Nazi Germany in the second World War.

Whether festooning cars and push chairs or pinned in neat bows on jacket lapels, the black and orange striped fabric is Russia’s answer to the red poppy badge in the UK and worn to honour those who fought in the Great Patriotic War.

With most Russians caught up in a wave of exultation about the annexation of Crimea, the Saint George ribbon has taken on new life this year as a fashion accessory that doubles up as a badge of resurgent national pride.

However, in former Soviet states the ribbon, distributed by local Russian embassies, is not getting a warm reception. Instead of association with victory over the Nazis, the colours are seen in the wake of the Crimea land grab as a symbol of creeping Russian expansionism.

Antipathy is most extreme in Ukraine which declared this week it was at war with Russia. As the insignia of pro-Russian separatists battling government forces, the black and orange colours inspire nothing less than fear and loathing that has already entered the military lexicon. Ukrainian troops have dubbed their enemies the “Colorados” after the orange striped beetle that, resistant to pesticide, is the scourge of potato growers across Europe.

Introduced in the 18th century, the Saint George ribbon was the highest military honours in Imperial Russia, awarded together with a gold medal for exceptional valour and glory in battle.

National unity
After going through various reincarnations in Soviet times, the ribbon has made a come back in Vladimir Putin’s Russia as part of a Kremlin campaign to glorify the memory of the second World War and boost national unity.

Enough ribbons have been distributed this year to encircle the globe six times, according to Russian state television.

As thousands of Russian tanks and missile launchers rumbled through Moscow rehearsing the annual Victory Day military parade this week, a small but significant rebellion against the Saint George ribbon was gaining momentum in neighbouring former Soviet states.

In Kiev, members of Svoboda, the Ukrainian nationalist party that supported the Maidan revolution, introduced a bill classifying the ribbon as “extremist.” If the legislation is adopted, Ukrainians found sporting the black and gold colours could face prosecution.

Official ban
Alexander Lukashenka, the dictatorial president of Belarus, has been careful not to challenge Russian action in Ukraine fearing reprisals.

However, Za Svobodu (For Freedom), the Belarusian opposition party, stuck its neck out this week, demanding an official ban on the distribution of Saint George ribbons that it claimed had become associated with Russian imperialism .

In the Baltic republics, Victory Day has always been an unpleasant reminder of renewed Soviet occupation after the second World War. Estonia, Latvia and Lithuania won European Union and Nato membership in 2004, but are still afraid that the Kremlin might use the presence of substantial Russian minorities in their midst to destabilise the region.

“In Russia this little ribbon symbolizes the rebirth of the Russian empire and one’s belonging to the world that Putin is trying to create,” wrote the Latvian newspaper Latvijas Avize.

“Russians who wear the ribbon in Latvia are undeniably demonstrating a desire to merge once again with Russia.”