French president says he will not lecture Sisi on human rights 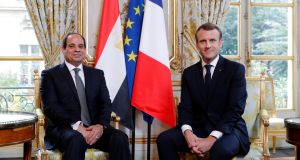 President Emmanuel Macron has been criticised by human rights groups for receiving president Abdul Fattah al-Sisi as an honoured guest, and for saying he would not lecture the Egyptian leader on human rights.

Field Marshal Sisi took power in a coup in July 2013. He completed a three-day official visit to Paris on Thursday.

By coincidence, Mr Macron received Mr Sisi on Tuesday, immediately after the departure of Taoiseach Leo Varadkar. Unlike Mr Varadkar, Mr Sisi was invited for lunch at the Élysée Palace. Mr Varadkar was to have spoken to Irish media in the courtyard of the palace, but the Irish contingent were hustled away because Mr Sisi was arriving.

Also by coincidence, Mr Varadkar nearly crossed paths with the Egyptian president on the day that Irishman Ibrahim Halawa returned to Dublin. “Did you talk about Ibrahim Halawa, who has just returned home after four years in an Egyptian prison for no reason whatsoever?” a French journalist asked Mr Macron when he and Gen Sisi made remarks to the press, in the very same room where Mr Varadkar and Mr Macron stood earlier.

Mr Macron did not address Mr Halawa’s case, but said he was “conscious of the security context and the conditions in which president Sisi is working”. Egypt is fighting an insurrection by Islamic State and affiliated jihadists in the northern Sinai desert.

A few minutes earlier, Mr Macron read remarks referring to “the imperative of fighting terrorism while respecting the rule of law”. Going off script, Mr Macron added: “I believe in the sovereignty of states. So in the same way that I do not accept other leaders giving me lessons on how to govern my country, I don’t lecture others.”

With “the best intentions in the world” the West had created chaos, death and violence in Iraq and Libya, by “wanting to give lessons out of context and breaking down political systems that did not share our values”.

Visibly annoyed by the question, Mr Sisi launched into a four-minute monologue in which he said, “I am responsible for the security of 100 million people . . . We are against violence and with human rights.” He claimed Egyptian security forces “do not practise torture”.

Bénédicte Jeannerod, the director of Human Rights Watch in France, asked what “context” Mr Macron referred to. “The anti-terrorist fight stained by atrocities, used to repress peaceful opposition and which is ultimately ineffective?” Ms Jeannerod accused Mr Macron of “turning his back on human rights”.

At a press conference in Paris before the Macron-Sisi meeting, human rights groups said 60,000 people have been arrested since Mr Sisi came to power, including Muslim Brothers, members of democratic left-wing movements and civil society groups, trade unionists, journalists and homosexuals.

The regime has executed dozens of opponents and practises extra-judiciary killings. Some 1,700 people have disappeared in the past two years. The UN committee on torture accuses Egyptian security forces of “systematic torture”.

Egypt’s human rights record is so poor that even the Trump administration has cut back on economic aid in protest.

Egypt has purchased €6 billion worth of French weapons since 2015, including 24 Rafale fighter aircraft, a frigate, two Mistral helicopter carriers and missiles. The country receives €2 billion annually in French development aid.

Mr Macron said France sees Egypt as a partner in the struggle against terrorism. France also looks to Mr Sisi for help in resolving the civil war in neighbouring Libya, and in reconciling the Palestinian groups Fatah and Hamas.

After the Élysée, Mr Sisi and his delegation were invited to dinner at the foreign ministry and breakfast at the finance ministry.