Both Iberian states face general elections. Only one can currently expect a stable outcome 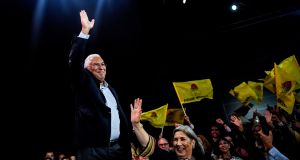 Across the street from the Socialist headquarters in central Lisbon, an opposition party has hung an election campaign poster with a provocative message. “Honk your horn if you’re fed up with socialism,” it reads. But, on this weekday morning, there are hardly any car horns to be heard.

That could be interpreted as a reflection of the lead that Socialist prime minister António Costa is enjoying over his rivals as he goes into this Sunday’s general election.

Five weeks later, his Spanish counterpart, the Socialist prime minister Pedro Sánchez, will do the same, also expecting to emerge from the ballot as the winner.

Yet it is the Portuguese leader who can sleep easier, in the knowledge that even if he fails to secure a parliamentary majority, forming a new government promises to be a more straightforward task than across the Iberian border. Sánchez has already failed to do just that after winning an election in April, as negotiations to form a new administration descended into rancorous recrimination.

Costa has used the prospect of his country falling into a Spanish-style impasse to boost the vote for his Socialists.

“What we don’t want is a repeat of what is happening in Spain, ” he said in a debate with his centre-right opponent Rui Rio. Costa added: “We’ve had four years of stability and Spain has had four elections in four years.”

In October 2015, few expected Costa to find himself in this enviable position. His Socialists had just lost a general election to the conservative partnership formed by the Social Democratic Party (PSD) and the People’s Party (CDS). The economy was rebounding from a collapse which had seen it request an EU bailout, but it remained fragile.

Against the odds, Costa built a three-way alliance with the Left Bloc (BE) and the Communist Party, whose parliamentary support allowed him to form a minority government.

Disparagingly dubbed the “geringonça” (or “contraption”) by the right, the leftist partnership proceeded to introduce a swathe of progressive policies. It raised pensions and the minimum wage, while cutting university fees and public transport costs.

“We were able to do all this while reducing the deficit and the debt, so we sort of managed something that many considered impossible,” says João Galamba, a Socialist member of parliament and junior minister, speaking in the party headquarters. As it became apparent that this leftist experiment was working, the significance of the word geringonça shifted.

“We cherished it,” Galamba says. “We internalised it as a private joke and we were able to transform a word which had negative connotations into something positive that the Portuguese valued.”

Little wonder that this summer, as he sought to form his own leftist government, Spain’s Sánchez claimed to be inspired by the geringonça.

Yet his efforts ran aground in late September, after he failed to win the support of his most natural ally on the left, Podemos. Earlier in the summer, he had already lost an investiture vote as Podemos, seeking to form part of a coalition government against Sánchez’s wishes, refused to back him.

Ruminating on the success of the Portuguese leftist government earlier this year, Spain’s foreign minister Josep Borrell said: “In Portugal it has worked because Pablo Iglesias wasn’t Portuguese”, a reference to the fiery leader of Podemos. Yet beyond the personalities involved, there are specific reasons why Portugal has found pact-building easier than Spain.

One of those is the strength of Podemos, which was founded in 2014 and in little more than a year had established itself as the country’s third parliamentary power, even threatening at one point to supplant the Socialists as the main force on the left.

The BE, which is Portugal’s equivalent of Podemos, has a smaller electorate and has never threatened the dominance of Costa’s Socialists.

“This makes agreements easier because everybody knows their place,” says Pedro Magalhães, a political scientist at the University of Lisbon. In Spain, the arrival of Podemos was soon followed by that of Ciudadanos, to the right, as well as the less influential far-right Vox, all of which have disrupted a two-party system that had existed for more than three decades.

“In Spain, that transformation from a two-party system to a four- or 4½-party system is the reason why reaching an agreement on the left is more difficult,” says Magalhães. “The place and status of each party is much less clear.”

Spain’s deeply divisive Catalonia crisis has also made consensus difficult. While the parties on the right offer varying versions of a strident brand of unionism, helping explain why they have managed to form some post-electoral pacts of their own recently, on the left the differences are more visible: the Socialists advocate a more conciliatory brand of unionism, still based on the rule of law, while Podemos backs the region’s right to self-determination.

Sánchez cited this policy difference as a reason for not wanting Iglesias to be a minister in his government.

Portugal, whose population is less than one-quarter of that of Spain, has no such territorial problems, meaning mainstream politics focuses almost exclusively on socio-economic issues. Catalonia has also fed into an existing polarisation in Spanish politics, which is not visible over the border.

“There is a somewhat more consensual political culture in Portugal than in Spain,” says Robert M Fishman, a professor of political science at Madrid’s Carlos III University and author of a recent book examining the two countries’ politics.

He sees that difference as being rooted in the two nations’ emergence from dictatorship in the 1970s.

“Portugal had a revolution leading from dictatorship to democracy,” he says. “You might expect that to lead to more polarisation, but it’s the cultural work that the Portuguese have done, remembering and commemorating the revolution, that has led them to forge a consensual political culture.”

Spain’s non-revolutionary transition to democracy did not have the same long-term effect, Fishman explains.

Portugal’s government has had difficulties of its own, and a weapons theft scandal affecting a former minister has plagued the prime minister on the campaign trail. But the two countries’ Socialist leaders now face general elections in very different contexts: Costa in one of consensus and a degree of stability; Sánchez amid fragmentation and acrimony.

“Spaniards are beginning to pay serious attention to Portugal,” says Fishman. “How far that process can go we don’t know, but Spaniards can learn a great deal from Portugal.”