About 10,000 demonstrators converged on Government House in the capital 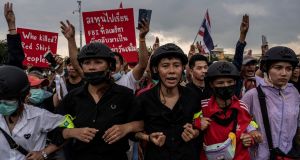 Anti-government protesters, some raising a three finger salute, a reference from the ‘Hunger Games movies that has become a symbol of anti-government defiance, during a march from Democracy Monument to Government House in Bangkok on Wednesday. Photograph:Adam Dean/The New York Times

Thousands of protesters broke through police cordons and surrounded Thailand’s seat of government on Wednesday, marking a symbolic moment in their three-month campaign against the establishment.

About 10,000 demonstrators converged on Government House in the capital, Bangkok, settling in for what organisers said would be several days of protests.

The student-led demonstrators are calling for the resignation of the government of former coup leader Prayuth Chan-ocha, the writing of a new constitution and an end to the harassment of political dissenters.

They are also making what were until recently unheard of demands for limits on the wealth and powers of King Maha Vajiralongkorn, who spends most of his time in Germany.

On Wednesday the king’s wife, Queen Suthida, was jeered as her limousine passed within a few metres of the protests. Demonstrators cried “My tax money!” and gave her their defiant three-fingered salute, taken from the film The Hunger Games.

The royal couple has been in Thailand only on brief holiday visits this year, but returned on Saturday for what is expected to be a longer stay, and is now encountering a protest movement that incubated during the coronavirus lockdown.

On Tuesday police violently dispersed a pro-democracy protest at Bangkok’s Democracy Monument close to where the king’s motorcade was due to pass, and arrested 21 people. Human Rights Watch said those detained were charged with intent to cause violence, using loudspeakers without permission and several other offences.

On Wednesday protesters gathering at the monument ahead of the march on Government House were met by pro-government demonstrators in yellow shirts, the colour of the royalist establishment. Some of those wearing yellow shirts were said to have been police.

The anti-government protesters broke through metal barriers around the monument, which commemorates the 1932 uprising against absolute monarchy, and removed the plant pots put in place after the 2014 military coup to keep people away.

Apart from some fistfights and minor scuffles, the unrest has been peaceful so far. However, the mood has turned uglier in terms of the rhetoric being used by both sides, and the apparent move by the Thai government to muster police on their side.

“We’re seeing some signals from the opposite side that they are trying to provoke people,” said Napat Chaunrumluek, a 21-year-old student at Thammasat University.

“It started in the morning, and there was a little chaos.”

On Tuesday, hashtags insulting the king and other royals were traded on Thai social media including one saying “the king is trash” and another asking “why does the king exist?” – Copyright The Financial Times Limited 2020