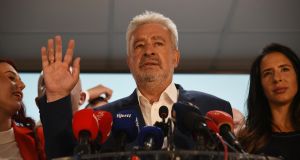 Opponents of Montenegrin president Milo Djukanovic say they are poised to end three decades of rule by his Democratic Party of Socialists (DPS) after a hard-fought election that was marked by a row between the government and the Serbian Orthodox Church.

With nearly all votes counted after Sunday’s ballot, the DPS was expected to secure 30 of the 81 seats in the Balkan state’s parliament, ahead of an alliance of groups called For the Future of Montenegro with 27 seats.

A coalition between the alliance and other opposition movements would have a wafer-thin majority of 41 seats, and its leaders have urged smaller parties representing Montenegro’s ethnic minorities to join them in breaking the DPS’s long grip on power.

“The regime has fallen . . . A new day in free Montenegro has started,” said Zdravko Krivokapic, leader of an alliance that includes strongly pro-Serb parties that Mr Djukanovic claims could damage the Nato member’s hopes of EU accession and strengthen its links with Russia.

Mr Djukanovic has dominated politics in Montenegro since the early 1990s, leading it to independence from Serbia in a 2006 referendum and into Nato in 2017, and he said he still hoped to secure a majority in parliament.

Analysts noted that Montenegro’s opposition parties have little to unite them except a determination to oust Mr Djukanovic, making any coalition government they might form vulnerable to division.

Mr Djukanovic has long faced allegations of graft and cronyism – which he denies – and critics say he portrays himself as a strong EU and US ally in the Balkans to fend off western scrutiny of organised crime, corruption and rule of law issues in Montenegro.

He warned voters before Sunday’s ballot that the opposition would hand influence in the country to Moscow and Belgrade, amid major protests by Montenegro’s large Serb community over a new law that could see the state seize churches and monasteries now run by the Serbian Orthodox Church.

Election monitors from the Organisation for Security and Co-operation in Europe said the vote was marred by “widespread abuse of office and state resources [that] gave the ruling party an undue advantage against the backdrop of an intensely polarised debate over issues of church and national identity”.

Zoran Zaev returns as prime minister at the head of a coalition between his Social Democrats and the country’s main ethnic Albanian party. The Social Democrats narrowly won a July election that was the country’s first since it changed its name from “Macedonia” to end a decades-long dispute with neighbouring Greece.