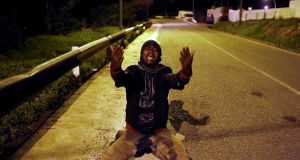 An African migrant reacts on a road after crossing the border fence between Morocco and Spain’s north African enclave of Ceuta. Photograph: M Martin/Reuters 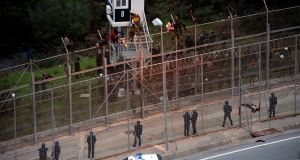 African migrants sit on top of a border fence during an attempt to cross into Spanish territories, between Morocco and Spain’s north African enclave of Ceuta. Photograph: M Martin/Reuters

Hundreds of sub-Saharan African migrants forced their way on Friday morning over a barbed-wire fence into Spain’s North African enclave of Ceuta, which borders Morocco.

Television footage showed migrants perched on the top of the fence as they tried to get over. Several people were injured after storming the barrier, emergency services said.

More than 800 people attempted to cross into Spain with a little more than half successful and taken to a temporary migrant detention centre to await their legal status in Spain, the government said.

Spain’s two enclaves in Morocco, Ceuta and Melilla, are often used as entry points into Europe for African migrants, who either climb over their border fences or attempt a dangerous swim along the coastline.

Some also try to cross from Morocco into mainland southern Spain by boat, despite tighter controls in recent years by the two countries which has diminished the number of those attempting this route.

Four African migrants drowned and 34 were rescued on Wednesday off the coast of Morocco when their boat sank, though it was unclear whether they were heading to Spain or to one of the two enclaves.

Libya has become a more common departure point for African migrants, most from sub-Saharan countries, who attempt the crossing to Italy.

An estimated 4,663 migrants have died in the Mediterranean this year, while a record number of migrants – 171,299 as of November 28th – have reached Italy by boat from North Africa in 2016.