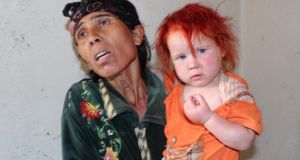 Sasha Ruseva holds two-year-old Penka, one of her 10 children, in Nikolaevo, Bulgaria. DNA tests have confirmed that she and Penka’s father are the biological parents of the girl found in Greece with another Roma couple

The chaotic state of Greece and its institutions was once again thrust into the spotlight yesterday when police announced they had arrested a childless couple in Athens on suspicion of attempting to pass off an eight-month-old Roma girl as their own.

The pair were seized as DNA tests proved a Bulgarian couple are the biological parents of another little girl whose discovery in a Roma camp in central Greece has triggered fears of rampant child-trafficking in the crisis-plagued country.

Bulgaria’s interior ministry said genetic profiling proved Sasha Ruseva (38), a Roma woman, was the mother of the girl known as Maria. Ms Ruseva had said she gave birth to the blonde, blue-eyed child while working as an olive picker in Greece but, unable to support the baby, had given her to a family living in a nearby Roma community.

Yesterday’s arrests came days after another Roma couple were charged with child abduction on the Aegean island of Lesvos when authorities discovered them with a baby boy who was not their own.

All three cases have thrown an unflattering light on the chaotic state of a nation not only in economic freefall but struggling to cope with a bureaucracy edging closer to collapse.

Widespread use of legal loopholes by corrupt state workers – in an EU member nation that until May had lacked a national birth registry – provided particularly fertile ground for child-trafficking.

Police said the unnamed couple arrested yesterday, who are believed to be Greek, had allegedly paid a Roma woman €4,000 for the baby shortly after she was born in February.

The suspects, described as a 53-year-old man and 48-year- old woman desperate to have children, allegedly turned to an intermediary with ties to the murky world of baby trafficking and offered to buy one. They now face charges of abducting a minor.

Similar charges were brought against the couple with whom Maria was found when police conducted a raid on a Roma settlement near Larissa last week – although their lawyer said yesterday they would seek to be released from prison after their story of being given the girl was backed up by her real mother and Bulgaria’s release of the DNA results.

Maria, who could be as old as six, was spotted peeping from under a blanket when officers and court officials swooped on the camp in search of weapons and drugs.

The discovery of the girl, who has undergone a battery of medical examinations to determine her age and origins, had the nation riveted – and triggered a worldwide search for her biological family. Smile of the Child, the charity in whose care she has since been placed, received more than 10,000 calls – many from parents whose own children had gone missing – following an international appeal to locate her relatives.

Inquiries revealed the child’s purported parents not only bore no relationship to her but had repeatedly falsified birth registrations in municipalities around the country. Records proved the woman found to be looking after Maria claimed to have given birth to six of her 14 children in less than a year – a ruse that would have enabled her to collect about €2,800 a month in child benefits.

Highlighting the parlous state of birth registrations in Greece, Konstantinos Tzanakoulis, the mayor of Larissa, the provincial capital of the region where Maria was found, admitted it was “pure luck” the case had been uncovered at all. “Who knows how many such incidents exist?” he asked. “We may never know.”

As a frontier state of the EU, at the crossroads of east and west, Greece has long been at the centre of people trafficking.

Since the debt-stricken nation’s economic crisis began, the trade is believed to have worsened as effective state controls collapsed. Stories are legion of babies being bought on the black market in a country with one of the lowest fertility rates in the EU. Bulgarian women have long fallen prey to schemes that involved them giving birth in Greece and handing over their babies to childless Greek couples for a fee.

At the head office of Smile of the Child, the charity he founded on the death of his son in 1995, Costas Giannopoulos said flawed Greek laws had not helped.

“Child-trafficking is not just a Greek problem,” he said. “It’s a European problem but the laws here are so complex and bureaucratic they make legal adoptions very difficult. – (Guardian service)