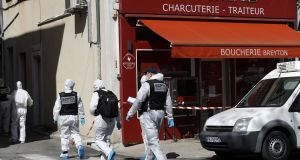 French police and investigators at the scene of the fatal knife attack in Romans-sur-Isère. Photograph: EPA/Alex Martin

France was confronted with what is being considered a terrorist attack in the midst of the coronavirus epidemic when a man stabbed two people to death and wounded five others in the Drôme department of southeastern France at the weekend.

A 33-year-old Sudanese refugee was in custody after the attack. He is suspected of attacking a tobacconist, his wife and a customer with a pocket knife in a shop in a pedestrian zone in the town of Romans-sur-Isère, population 33,000, at 10.45am on Saturday.

The suspect dropped his knife and continued to a nearby butcher’s shop. “He jumped over the counter and grabbed a meat knife,” the butcher, Ludovic Breyton, told France Bleu Drôme Ardèche radio. “I think he had broken his first knife so he came to the obvious place to find another.”

The assailant “chose a client at random”, stabbed him and ran out, said Breyton. “My wife tried to help the victim, in vain.”

The man who died in the butcher shop was Thierry Nivon (55).

Witnesses said the suspect shouted “Allah akbar” as he continued what interior minister Christophe Castaner called his “terrorist excursion”. The attacker stabbed a 59-year-old man of Algerian origin, a former salesman, in front of a Carrefour supermarket. He allegedly asked if the Algerian was a Muslim before planting the knife in his back.

The second man to die was Julien Vinson (44). Vinson opened his shutters to find himself face-to-face with the attacker. He was killed in front of his wife and 12-year-old son.

Mr Vinson worked as a waiter at La Charette, a popular cafe-theatre which his father Christian has owned for decades. Christian Vinson, who suffers from heart disease, was hospitalised when he heard that he son had been murdered.

The suspect then attacked a couple walking down the street before he was stopped by a police patrol which was enforcing lockdown restrictions. He dropped the knife, sank to his knees on the pavement and recited prayers in Arabic. An officer said he begged police to kill him.

“Those who were unfortunate enough to find themselves in his path were attacked,” said Marie-Hélène Thoraval, the mayor of Romans-sur-Isère.

According to the prosecutor’s office, police found hand-written documents in the suspect’s apartment in which he “complained of living in a country of infidels”.

France has been under terrorist alert since the massacre at Charlie Hebdo magazine started a wave of attacks in January 2015. The rampage in the Drôme was similar to the preceding attack, in the Val-de-Marne outside Paris, last January 3rd. That attack claimed one life and left two people wounded.

The latest suspect obtained refugee status in June 2017, and had no police or psychiatric record. Prior to moving to Romans-sur-Isère in January, he had trained to make leather goods in a village 30km away.

Two other Sudanese migrants have been arrested in connection with the case.

“All light will be shed on this odious act,” president Emmanuel Macron tweeted. Alluding to the coronavirus epidemic, Mr Macron said the killings “brought grief to our country, which has known difficult trials in recent weeks”.