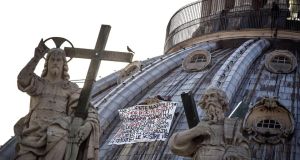 Italian businessman Marcello De Finizio stands on the dome of St Peter’s basilica to protest in Vatican City. He holds a banner with a request to Italian president Giorgio Napolitano and to Pope Francis in a protest against Europe. ‘Stop Europe, stop Fiscal Compact, Stop Mario Monti, Stop Enrico Letta and Stop Bolkestein’ are some of the sentences written on the banner. Photograph: EPA/Angelo Carconi


Cardinal Angelo Bagnasco, president of the Italian Bishops’ Conference, this weekend defended conference guidelines on child protection which state an Italian bishop has “no juridical obligation” to report “illegal doings” to the state judiciary.

The guidelines, called for by the Congregation of the Doctrine of the Faith in May 2011, were issued last week in a revised version which stated: “Given that in the Italian penal code, a bishop is neither a public official nor is he in charge of a public entity, then he has no juridical obligation to report to state judicial authorities any information he may have with regard to illegal doings”.


Victims’ rights
Speaking in Genoa on Saturday, Cardinal Bagnasco argued the guidelines did not represent a “no” to mandatory reporting; rather they were the expression of concern for the victims’ right to privacy, adding:

“We priests have to be very careful to respect the privacy, discretion and sense of reserve [of victims], we’ve got to be sensitive to the trauma of victims who do not want to be thrust into the public eye . . .”

Cardinal Bagnasco said the church’s moral obligation towards victims counts for much more than its juridical obligations. The guidelines were criticised by clerical sex abuse victims’ lobbies, such as US group Snap, which have always called for “mandatory reporting” of clerical sex offenders.

Victims’ lobbies argue that, while the right of victims and their families to privacy and discretion is justified, a primary concern must be to ensure no existing sex offender gets to abuse more children in future because he has not been reported to state authorities.

In an unrelated incident, businessman Marcello di Finizio climbed on to the cupola of the Basilica of St Peter’s on Saturday night, with a banner highlighting his economic problems. .