Iceland’s government collapses over letter in support of paedophile 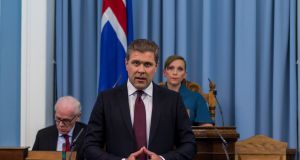 Iceland’s prime minister has called for a snap parliamentary election after one party in the ruling coalition quit the government formed less than nine months ago.

The party, Bright Future, cited a “breach of trust” as the reason it was quitting the coalition, after prime minister Bjarni Benediktsson’s Independence Party allegedly tried to cover up a scandal involving his father.

That leaves the country, whose economy was wrecked by the collapse of its banking system nearly a decade ago, facing its second snap election in less than a year.

The outgoing coalition would be the shortest-living government in Iceland’s history. The previous government was felled by the Panama Papers scandal over offshore tax havens.

“We have lost the majority and I don’t see anything that indicates we can regain that. I am calling an election,” Mr Benediktsson told reporters on Friday.

He said he would be looking to hold the election in November, though that would mean it would not be possible to finish next year’s budget.

It is ultimately up to president Gudni Jóhannesson, whom Mr Benediktsson will meet on Saturday, to make the decision on a new election.

If he accepts the call for an election, he is likely to ask the government to stay in place until a new coalition is formed, but he could also ask other parties to try form a majority.

The scandal revolves around a letter written by Mr Benediktsson’s father to help an old friend have his criminal record expunged after he was convicted of sex offences against children.

“The board of Bright Future has decided to terminate co-operation with the government of Bjarni Benediktsson,” the party said in a statement. “The reason for the split is a serious breach of trust within the government.”

The ministry of justice, under Sigrídur Andersen, a member of the Independence Party, initially refused to disclose who had written the letter of recommendation. She was later ordered to do so by a parliamentary committee.

Ms Andersen told broadcaster Stöd 2 that she had informed Mr Benediktsson about his father’s involvement in July but had not told anyone else.

He had later informed the chairmen of the coalition parties of the situation, he said.

The prime minister’s father, Benedikt Sveinsson, confirmed on Friday that he had signed a letter supporting his friend’s application to have his “honour restored”, a procedure that effectively erases a criminal record.

Among the requirements is a letter of recommendation from a close friend or associate.

Mr Sveinsson said he had not discussed the letter with anyone.

“This week, it came forth that my father had written a letter . . . I couldn’t have written such a letter myself and I will never try to defend that,” Mr Bendiktsson told a news conference.