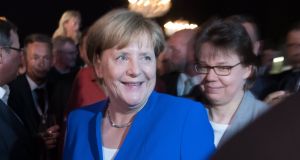 The greatest misconception about modern Germany is that it is run by a woman. In fact, it’s run by three women.

Enter Berlin’s hulking chancellery, take the curved metallic green lift to the seventh floor, and the eye is immediately drawn to the panoramic view over the German capital. Less flashy but far more interesting is the windowless corridor on the other side, lined with reddish beechwood doors, where the Merkel trio work.

After 12 years in power, everyone knows Angela Merkel, the chancellor. Beyond Berlin’s parliamentary bubble, however, few have ever heard of Beate Baumann and Eva Christiansen. Together with Merkel, they comprise a remarkable political trio that explain why the chancellor is on course to win next Sunday’s federal election. Just don’t expect Merkel’s publicity-shy advisers to ever go on the record about it.

Three doors down from Merkel’s sprawling office is that of Baumann. Her job title is “office manager”, but in reality the 54-year-old from Lower Saxony is far more. She first met Merkel in 1992, when the young minister was laid-up in hospital with a broken leg, exhausted by politics and in need of a capable assistant. An acquaintance mentioned Baumann; the women met, clicked, and have been inseparable ever since.

They sealed their co-operation pact at the end of 1999 when, together, they wrote a newspaper article arguing that Helmut Kohl, the ex-chancellor and Merkel’s mentor, had damaged their Christian Democratic Union (CDU) with illegal fundraising.

It was a risky move but, four months later, Merkel was CDU leader and at her side was Beate Baumann.

A fan of practical hair cuts, outfits and shoes, Baumann lurks on the fringes – never the spotlight – of public events with the chancellor. She has never given an interview about her work – and never will.

“Baumann is Merkel’s political alter-ego,” says one person who’s known her for years. “She’s her adviser, strategist, point woman, the woman who contradicts her and early on, if necessary, was the one who told Merkel to pull herself together.”

They may have worked together for more than 20 years, the doors linking their offices often open, but the two women have never moved beyond the formal “Sie” form to first-name terms.

Despite this, theirs is a “symbiotic relationship”, says Dr Hugo Müller-Vogg, a journalist and long-time Merkel watcher. “Baumann has a nose for lurking dangers,” he says. “She would do anything for Merkel. For Baumann, Merkel is her life’s work.”

At the opposite end of Berlin’s most powerful corridor is the office of Eva Christiansen. The 47-year-old from Cologne studied economics in Bonn, joined the CDU 20 years ago and, in 2002, joined Merkel’s team in the party’s headquarters.

A slim woman with blonde hair and penetrating blue eyes, her section covers policy planning and political communication. She is the chancellor’s eyes and ears, watching media and societal trends and ensuring the German leader overlooks nothing.

“Baumann and Christiansen operate as permanent feedback loop and enjoy Merkel’s complete trust to confront her with negative things,” says Andreas Rinke of Reuters Berlin and a long-time Merkel watcher.

Christiansen was behind the Merkel chancellery’s embrace of political “nudging”, a concept that uses positive reinforcement to achieve non-forced compliance with policy.

Berlin’s variety of nudging is called “effective governance” and less intrusive, officials say, but still uses the services of a psychologist and behavioural economist. Their task: to prevent policy being buried by bureaucracy and missed by its target audience.

A remarkable feature of Merkel’s inner circle – even when you extend it to the men (chief of staff, press spokesman and section heads) – is how intact and loyal it has remained.

Its members are all remarkably consistent on what they say about their boss: she is demanding but fair and doesn’t play people off against each other. With few intrigues or rivalries to loosen tongues, the court of Merkel, to journalists’ perpetual dismay, is far less prone to leaks than the chancellery roof.

The art of the possible

Besides satisfied staff, another reason why the Merkel machine still operates smoothly is that it ignored the Alastair Campbell school of political spin and messaging. Instead, her two advisers have developed their own model that accommodates the chancellor’s limitations, rather than forcing her into a Blairite style of governing that doesn’t fit.

Journalists despair at Merkel’s speeches, functional blocks of text often moulded by Baumann, but they fill a gap. Christiansen, meanwhile, has moved the chancellor beyond traditional speeches – never her strong point – into formats better suited to her talents, such as townhall meetings. Crucially, unlike other western governments, the Merkel trio have little faith in high-end production values.

The rule on the seventh floor of Berlin’s chancellery is this: do your homework and cover eventuality, because no amount of stage magic can rescue you. For the Berlin trio, recent British politics from Blair to Brexit are instructive in the dangers of style over substance.

After three terms in the chancellery, the Merkel-Baumann-Christiansen trio have perfected modern politics as the art of the possible. Their pitch to voters on September 24th – that Merkel has an eye on the big and small things – is a message in tune with a Zeitgeist that longs for stability in an unstable world.

Opinions may differ on whether the trio’s approach is ambitious enough for Germany’s looming challenges – from demographics to digitisation – but no one, least of all the Merkel-Baumann-Christiansen trio, expected their power play to be so successful.

Long before Merkel won the 2005 snap election, Hugo Müller-Vogg remembers Beate Baumann telling him how modern politics was so fast-moving, and modern voters so fickle, that eight years in office was the maximum anyone could hope for.

“No one would ever again match Helmut Kohl’s 16 years, she told me, and yet here we are,” he adds. “It continues to work because they take things as they come. There is no grand design.”