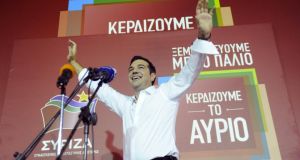 As they made their way to cast their ballot in the 72nd primary school in central Athens, some voters were frank in admitting they still had to make up their minds.

“It was a very difficult decision for me to make, even more difficult than the one I made in the January election. At the last minute I opted to stick with the same party I chose eight months ago, to give them a second chance,” said one, Georgia, who like many Greeks was cagey about divulging her full name to interviewers.

It was a strong indication that she had voted for Alexis Tsipras, whose Syriza party won a second general election in a year yesterday.

Another voter arrived on his motorbike, still undecided. “I really don’t know who to vote for. Who would you pick if you were in my position?” asked Nikos (32).

“I may give Tsipras another go of it or maybe I’ll give my vote to the Union of Centrists,” he added, the latter a reference to an idiosyncratic party whose fortunes have risen in line with the increasing disillusionment with politics.

Emerging from the gates of the school 10 minutes later, he said he had voted for Syriza.

As the results of the election filtered through, it seemed thousands of people like Georgia and Nikos had made a similar decision when they reached the ballot box. Syriza’s 35.5 per cent share of the vote was considerably larger than the most optimistic pre-election opinion poll would have predicted before the election.

But with abstention levels at a historical high of 44 per cent, the general election also reflected the widespread political fatigue in a country that has been put through two general elections and a referendum this year.

With a lower turnout in areas traditionally associated with the right, it was clear it was New Democracy that had the difficulty in mobilising its natural base.

But the low turnout is also a manifestation of the disillusionment, even anger, among many Greeks at the way their resounding No vote in July’s referendum – they were told they were voting against an unacceptable bailout proposal from the country’s creditors – didn’t stop the country from entering a third bailout agreement, with harsh conditions attached.

That may force Tsipras to invite a third party to join the government, which, in any case, can expect to enjoy the support of a constructive opposition, as it did during the summer when it passed the third bailout agreement through parliament.

With Syriza ruling out any formal co-operation with New Democracy and centrist Potami seemingly resolute that it cannot work with Syriza, that third element may be Pasok, which can be satisfied with its election performance. Running a joint election ticket with Democratic Left, Pasok managed to increase its share of the vote from 4.7 to 6.4 per cent.

The coming days will reveal the composition of the new government and whether it has the potential to last a full four-year term.