Wrapped up in the cold of the early hours of the northern French morning, hundreds of migrants queue at Calais as they are bussed out of the ‘Jungle' camp. Video: REUTERS 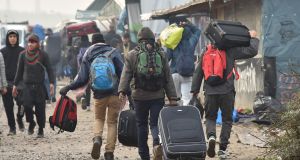 Migrants with their suitcases in the Calais Jungle camp. Photograph: Philippe Hugen/AFP/Getty 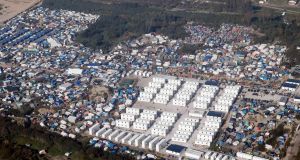 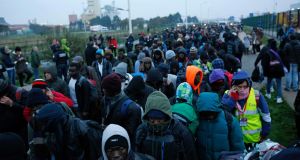 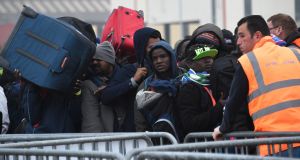 France began clearing the sprawling migrant camp known as the Calais “Jungle”on Monday, with hundreds carrying suitcases queuing outside a hangar to be resettled in reception centres across the country.

The first buses departed less than an hour after immigration workers started the operation at 7am Irish time, and officials predicted some 2,500 would leave on the first day.

Armed police fanned out around the warehouse and across the squalid shanty-town after a night during which small groups of migrants burned toilet blocks and hurled stones at security forces in protest at the plans to dismantle the camp.

President Francois Hollande promised on September 26th to dismantle the country’s largest shanty town by the end of the year. A census by the prefecture on October 11th counted 6,486 residents of the camp, including 1,291 unaccompanied minors.

“I hope this works out. I’m alone and I just have to study,” said Amadou Diallo from the West African nation of Guinea. “It doesn’t matter where I end up, I don’t really care.”

French interior ministry spokesman Pierre-Henry Brandet said that authorities had not needed to use force and that the large police presence at the camp on Monday was just for security.

A 3,000sq m hangar adjacent to the camp has been transformed into what Fabienne Buccio, the prefect of Pas-de-Calais, calls a “bus station”. The migrants are divided into four queues: adults, unaccompanied minors, families, and the most vulnerable, including pregnant women and those under medical treatment.

Under this triage system, each migrant is given a colour-coded bracelet corresponding to the French region he or she chooses, taken to a tent with migrants bound for the same region, then picked up by a coach there.

The prefects at the place of destination are notified of the coach’s departure, and the progress of each vehicle will be tracked by a satellite positioning system. Police and gendarmes will be present at “pit-stops”.

By 8.30am local time, white buses had started lining up within the gated area of the warehouse compound ready for the first group of people. The first bus with passengers left shortly afterwards.

Sixty coaches will depart the camp on Monday; 45 each day thereafter, until the camp is empty. The entire operation is expected to take between 10 days and two weeks. Unaccompanied minors will be entrusted to France Terre d’asile, and will be housed for two weeks in the heated freight container dormitories that were set up in a fenced-in part of the camp last winter.

The fate of the unaccompanied minors is still to be resolved. The majority want to go to England, where up to 500 have family members.

Interior minister Bernard Cazeneuve has called on the British government to “step up its efforts” in line with their “moral duty”.

About 70 minors were transferred from the camp to the UK last week, and a dozen agents from the home office are in Calais to process the children.

But British media have published photographs of alleged minors who appear to be over 18. A Tory MP demanded dental tests to prove their age, which was refused by the dental association on ethical grounds.

In its statement on the demolition of the camp, the Immigrant Council of Ireland lamented the Irish Government’s “recent commitment to take in only 20 lone children this year”.

The dismantling of the camp is like “D-Day” for the Port of Calais, its chief executive said. But Jean-Marc Puissesseau warned it would be a “waste of time” unless a police presence was maintained in the French city to stop refugees and migrants who want to travel on to Britain from gathering there.

“ It’s for us really the D-Day. Because I will not say it was the war here but since two years (ago) we are living in constant stress and living (with) a lot of attacks on the highway to try to slow down the traffic and to try for the migrants to get into the lorries and so on. “So really today it’s a big day, we are very happy.”

Migrants who’ve been “Dublined”, the term for those who were finger-printed and registered on setting foot in the EU, in line with the Dublin accords, fear they will be sent back to the country where they first arrived.

Up to 3,500 migrants have vanished from the camp in the run-up to the evacuation. It is not clear if migrants who refuse to move to CAOs will be allowed to leave the camp peacefully, or sent to detention centres.

Migrants are resorting to ever more desperate means, such as attempting to row across the Channel, one of the world’s busiest waterways, in rubber dinghies, or pooling resources to purchase small speed boats.

Traffickers have raised prices from approximately €700 before the 2015 crisis to an average of €5,000.

French officials note that the UN high commissioner for refugees has called for the closure of the camp. “Everyone knows another winter in the camp is not possible,” housing minister Emmanuelle Cosse wrote in Libération newspaper on October 14th. “It is out of question that we leave people any longer in the mud and distress.”

Conditions in the camp are terrible, with no electricity and little water. A female interpreter for a French television crew was raped at knife-point on the outskirts of the camp on October 18th. The same day, a 26-year-old African was beaten to death at the Norrent-Fontes camp, 60km away.

According to official figures, 33 migrants have met violent deaths in the Calais region since January 2015, most while attempting to board trains or lorries bound for Britain. An Eritrean died when he was hit by a British motorist on October 9th.

Local mayors and residents are mostly deaf to government pleas for “national solidarity” with Calais. There have been demonstrations or acts of vandalism against relocating the residents of the camp in the Drôme, Essonne, Hérault, Isère, Loire-Atlantique and Var departments.

A poster commissioned by Robert Ménard, the extreme right-wing mayor of Béziers, south central France, showed a crowd of African and Arab men in front of Saint-Nazaire cathedral. “The State is imposing them on us. This is it. The migrants are coming!” said the poster, which was removed after complaints by anti-racist groups.

Contrary to right-wing predictions, the most likely outcome is not the creation of “mini-jungles” across France, but a return to the situation that followed the closure of the Sangatte camp by Sarkozy in 2002, when aid organisations were forced to distribute tents, blankets and food by the roadside.

Aid volunteers now fear that an operation portrayed by the government as “resolutely humanitarian” will instead precipitate a worse humanitarian crisis.

Cyclone Nisarga makes landfall near Mumbai as storm surge threatens to flood slums 11:46
Sweden should have done more to combat coronavirus, health chief says 10:51
Pope Francis condemns racism and street violence in US 10:20
Trudeau lost for words when asked about clearing of protesters for Trump photo 09:55
Chinese doctor’s death from Covid-19 prompts anger over lack of protection for hospital staff 09:17