Opinion: EU citizens could rightly ask why the rest of the European Union is being forced to adopt a candidate because of Germany’s attachment to a system 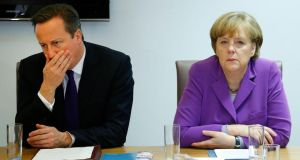 ‘The key question is whether both David Cameron and Angela Merkel have backed themselves into a political corner. Both risk losing political face if their preferred outcome is not achieved.’ Photograph: Yves Herman/AP

As the dust settles on the European elections, focus has turned to the appointment of the next European Commission president.

The question of who will lead the commission over the next five years had promised to be an exercise in in-house European Union decision-making. Instead it has become a potentially dangerous political impasse that could have serious implications for the EU.

The leadership of the commission has always been a tightly fought contest. Britain under Tony Blair vetoed the appointment of Guy Verhofstadt in 2004, for example, with the French opposed to Chris Patten and leaders settling on José Manuel Barroso instead.

But the timing of the current controversy, less than three years before Britain holds a referendum on EU membership should the Conservative Party win next year’s general election, has given the issue added urgency.

The debate over the suitability of Jean-Claude Juncker for the post has gathered huge momentum in the British media and internationally, as evidenced by British prime minister David Cameron’s article in The Irish Times last Thursday in which he outlined the reasons for his opposition to the so-called Spitzenkandidat system.

The origin of the current impasse stretches back more than a year, when the European Parliament mooted the innovative proposal that the next president of the commission should be linked to the results of the European elections. Citing a clause in the Lisbon Treaty that says the European Council should “take account” of the European elections, the idea was that each political group in the parliament should nominate a candidate ahead of the election, with the candidate of the “winning” party attaining the post.

Despite claims from the German media, the system never truly gained traction with voters across the rest of Europe, mostly because it was never fully endorsed by the member states and has no definite legal basis in the EU treaties.

By half-heartedly backing the process and failing to veto it at an earlier stage, EU leaders allowed the European Parliament to seize the initiative on the issue.

Britain is at fault for not raising objections to the issue earlier, though the Conservatives’ decision to leave the European People’s Party (EPP) group in 2009 meant it was on the outside looking in when the EPP selected Juncker in March.

The key question is whether both Cameron and Merkel have backed themselves into a political corner. Both risk losing political face if their preferred outcome is not achieved. A compromise is still possible – the appointment of Danish prime minister Helle Thorning-Schmidt, for example, with Juncker in a different role, is a possibility, though the fact that Juncker’s appointment has been couched as a democratic imperative makes it difficult for Merkel to back down.

“Go before you wreck everything,” Rocard concluded.

This view that Britain is holding the EU hostage is gaining serious traction in EU circles. Since Cameron’s Bloomberg speech in January last year, in which he outlined Britain’s plans to renegotiate EU membership, EU officials have been remarkably relaxed about a possible British referendum. Ask most Eurocrats around Brussels what are the main issues facing the EU and they will mumble something about “jobs and growth” and “democratic accountability”. They are unlikely to mention Britain.

This is worrying for the EU and for Ireland. The ramifications of a British exit from the EU would have serious implications for the Republic, in terms of trade, border control and justice and home affairs.

Even its harshest critics accept that Britain provides an important counterbalance to the large, more federalist continental member states. Rather than Britain holding Europe hostage, EU citizens could rightly ask why the rest of the union is being forced to adopt a candidate because of Germany’s dogged attachment to a system many member states privately oppose.

For many, the European Parliament’s innovative attempt to give voters a direct say in the election of the commission president represents a laudable effort to address the “democratic deficit” between the EU and its citizens.

However, the unfortunate timing of the current debate, and Britain’s justifiable concerns about the process, means it risks alienating Britain at a decisive point in its relationship with the EU. Some may argue that preserving the Spitzenkandidat system at all costs is a price worth paying for democracy, but the alternative may be to help hasten a British exit. That would be the most serious challenge to the EU since its foundation.