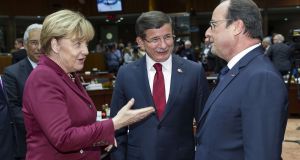 The EU-Turkey agreement signed on Sunday represents one of the most significant political engagements by the European Union with Turkey for decades.

Despite increasing concerns about human rights and rule of law under Turkish president Recep Tayyip Erdogan, EU leaders agreed to liberalise the visa regime for Turkey, accelerate accession negotiations and offer a financial package of up to €3 billion in return for help with the refugee crisis.

The political motivation behind the deal is clear – the unprecedented refugee crisis has forced the EU to engage with the country to its east, overcoming concerns about that country’s dubious democratic credentials.

Europe’s migration crisis shows no sign of abating. While the numbers arriving in Europe fell at the start of November, they are still 10 times higher than in November 2014. According to the UNHCR, 220,000 migrants reached the EU via the Mediterranean in October. The European Union is struggling to cope. Images from the Greek-Macedonian border this weekend showed migrants fighting with riot police.

Macedonia, Serbia and Greece have announced they are only accepting refugees from Syria, Iraq and Afghanistan, leaving thousands of others stranded at borders. The prospect of long-term refugee camps close to member states’ borders is now emerging as a real possibility.

While the European Commission has insisted that the temporary introduction of controls is permitted within existing Schengen rules, even the EU’s most senior officials have warned that the future of Schengen is in doubt.

Faced with an unprecedented threat to Schengen – and a possible humanitarian crisis as winter approaches – the European Union has turned its attention outside its borders to find a solution. The migration summit in Valletta focused on Africa; Sunday’s EU-Turkey summit focused on addressing the problem at the EU’s southeastern border, the main transit point for migrants entering the EU.

German chancellor Angela Merkel has been driving the policy response, putting to one side her long-standing opposition to EU membership for Turkey, as she tries to put some control on the unprecedented inflow of refugees into Germany and quell domestic political criticism of her open-doors policy.

Merkel’s decision to convene a mini-summit of core EU countries ahead of Sunday’s summit also suggests that Germany is prepared to sidestep those countries which are opposed to migrant quotas, as she seeks to formulate a credible refugee policy.

By far the most politically significant element of the agreement is the commitment to lift visa requirements on Turkish citizens travelling to the Schengen area by October 2016, a move that will grant up to 75 million Turkish people visa-free access to the EU, a concession that Turkey has long been requesting.

How this will play with the French and German public in the run up to elections remains to be seen.

A commitment to open new chapters in Turkey’s accession negotiations is also significant, but it is a process that is likely to take years, and member states were keen to stress that it is a separate issue from the deal agreed on Sunday.

These final conditions have prompted concerns from human rights groups that more and more refugees will be stranded in Turkey, in addition to the two million Syrian refugees already in the country.