Does Germany have a problem with criminal refugees?

After 100 days in limbo Angela Merkel begins talks on forming a government with the centre-left Social Democrats. Top of the agenda: refugees 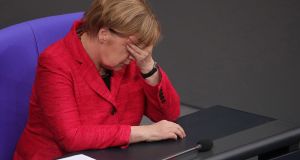 Germany’s chancellor Angela Merkel: the refugee question, which she sprang on her own people two years ago, has come back to haunt her. Photograph: Krisztian Bocsi/Bloomberg

What is happening in Germany?
On Sunday, after more than 100 days in limbo, Germany’s acting chancellor Angela Merkel begins exploratory talks between her centre-right Christian Democratic Union (CDU) and her former partner, the centre-left Social Democrats. Also at the table, Dr Merkel’s conservative Bavarian sister party, the Christian Social Union (CSU). After the three parties ended election night last September as big losers, all are angling to emerge as winners from the coalition talks. Top of the agenda: what to do about refugees.

Why so much fuss about refugees?
Perhaps because the Germans have so little else to worry about. Their economy grew 2.3 per cent in 2017, the jobless rate is at a post-unification low, wages are rising and the public debt clock this week began running backwards. But the refugee question, which Chancellor Merkel sprang on her own people two years ago, has come back to haunt her. After allowing in more than one million people in 2015-2016, she is battling a growing feeling of insecurity among voters, who feel the state is failing to fix cracks this caused in the public order.

Hasn’t the refugee crisis calmed down in the last year?
Yes, after Europe closed its borders. But Germany is traumatised by how its warm welcome for refugees was plunged into darkness two years ago with the mass groping and rape of young women at New Year’s Eve celebrations in Cologne and other cities. A series of terrorist attacks followed in the summer of 2016, some committed by asylum-seeking sympathisers of so-called Islamic State. Berlin’s Christmas market attack of December 2016, in which 12 died, exposed massive failings by politicians and police. Since then there has been a steady flow of young male asylum seekers and refugees involved in killings, rapes and thefts. The term “criminal foreigner” is now firmly cemented in public discourse and contributed to 12.6 per cent support for the far-right Alternative für Deutschland (AfD) last September.

How big is the problem?
Impossible to say, because of the sheer numbers and because Germany’s decentralised federal states have their own rules and methods of collating refugees and crimes, combined with a chronic inability to communicate with each other – and Berlin. Strict limits on what information police can release about crimes, suspects and victims has complicated matters further, as has a lack of clarity over just how many asylum seekers have vanished without trace. This has been a boon to populists who, in their social media echo chambers, suggest the subjective rise in refugee criminality is more accurate than the hard data.

What does the data say?
First, the total number of asylum seekers in Germany by the end of 2016 was up 490 per cent compared with 2014.
Almost 300,000 crimes (9 per cent of the total) were linked to refugees/asylum-seekers in 2016, up 42 per cent year-on-year.
Federal statistics indicate that, of almost 4,000 rapes recorded in the years 2015 and 2016, the percentage of non-national perpetrators jumped in that time from 33 to 38 per cent.
A new study this week showed that, in the two-year period to end-2016, the number of refugees in the state of Lower Saxony (population 7 million), jumped by 117 per cent to 163,000, while refugee crime suspects jumped by 242 per cent. Put another way, crimes with a refugee suspect jumped from four per cent in 2014 to 13 per cent two years later.

So Germany has a problem with criminal refugees?
It is struggling twice over: to address adequately a problem it imported two years ago, while keeping the scale of the problem in perspective. A Lower Saxony report released this week notes no spike in crime among refugees from Syria, Iraq and Afghanistan – comprising over half the total. They see a problem with migrants from Morocco, Tunisia, Algeria. Almost half (49 per cent) are young men under 30 with no family, openness to recruitment by extremists, and a pronounced macho attitude towards women and authority. Another factor encouraging their reckless, criminal behaviour, researchers suggest, is their low chances of being able to remain in Germany.
How is Angela Merkel planning to tackle this?
By tightening up asylum laws and boosting spending on police, she hopes to win back public trust and claw back voters from the AfD. Her challenge has parallels to the 1960s when West Germany imported millions of so-called “guest workers” to fill gaps in the booming post-war economy. Only in retrospect did author Max Frisch note: “We called for workers, we got people.”
Germany’s struggle today: realising that not all refugees and asylum seekers are saints, but neither are they all sinners, either. When AfD deputy leader Beatrix von Storch raged on Twitter this week about “gang-raping Muslims”, her account was suspended.