Reported US gazumping of deals angers Europe, which has its own internal wrangles 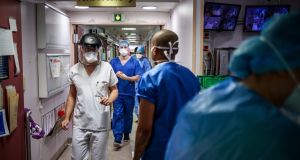 French media refer to a “wild west” or “jungle” atmosphere for medical supplies. The Harvard Business Review warns that “a new era of autarkic hoarding” motivated by “coronavirus nationalism” risks increasing fatalities from the pandemic.

In a pattern similar to that seen in other countries, the French national government is sometimes in competition with regional health authorities. Presidents of French regional councils, who are responsible for procurement for nursing homes and home caregivers, have raised the alarm.

Jean Rottner, a medical doctor who heads the GrandEst region, and Renaud Muselier, president of Provence-Alpes-Côte d’Azur, claim American buyers waylaid a shipment of surgical masks bound for their regions on the tarmac at Shanghai airport last week. The Americans allegedly showed up with suitcases full of dollars and offered three times what the French had agreed to pay.

The US administration denied the story.

“The US is paying China for masks that were intended for other countries, by offering three times the original price”

The Paris Île-de-France region also reported losing millions of masks on order from China to a higher bidder, possibly the US. And the Bordeaux-Nouvelle-Aquitaine regional authority had to reroute its shipment of 2½ million masks many hundreds of kilometres by lorry because of airport congestion in China.

US rear admiral John Polowczyk told a White House briefing on April 2nd that he is “scouring the globe” for coronavirus equipment. Mr Polowczyk said he had already brought six planes filled with medical supplies back to the US and planned 28 more flights in coming weeks.

“Today, America is doing what it knows how to do best,” the Journal du Dimanche reported on April 5th. “Buying. Without scruple. The US is paying China for masks that were intended for other countries, by offering three times the original price.”

The French are not the only angry Europeans. Andreas Geisel, minister of the interior for Berlin state, accused the US of “modern-day piracy” in an interview with the Tagespiegel newspaper. Mr Geisel said a shipment of masks manufactured by the American company 3M in China and bound for German hospitals was confiscated during transhipment in Bangkok.

In a video-conference summit of G7 leaders on March 16th, the heads of state and government of the world’s richest countries warned Mr Trump against trying to monopolise a vaccine.

A French dispute with Sweden over the confiscation of millions of surgical masks was resolved on April 4th, as a result of mounting political and media pressure

The US president has used the Korean war-era Defence Production Act to justify the seizure of surgical masks manufactured abroad by 3M. He has angered Canada and Brazil by attempting to prevent the shipment of masks and respirators made by 3M in the US under contract for them. 3M said the request carries “significant humanitarian implications” for Canadians and Brazilians.

In what the Harvard Business Review terms reverse protectionism, other countries, including France, Germany, Russia and Turkey, have also requisitioned medical supplies to prevent their export.

A French dispute with Sweden over the confiscation of millions of Swedish-owned surgical masks was resolved on April 4th, as a result of mounting political and media pressure. The masks, which were purchased by the Swedish company Molnylcke in far east Asia, were seized at a distribution warehouse in Lyon a month earlier. They were returned to the company on orders from the Élysée. France nonetheless reserves the right to requisition all supplies manufactured in France, even by foreign companies.

The reigning every-man-for-himself attitude is severely testing European solidarity. When the epidemic struck Italy, Rome pleaded for EU help, in vain. Germany and the Czech Republic banned the transfer of masks or equipment, and a Chinese shipment to Italy was waylaid in Prague in murky circumstances.

Procurement rules requiring bids for tender and normal trade practices have fallen by the wayside. Buyers are required to pay cash on the nail. An investigation by Radio France found that hundreds of intermediaries had sprung up, many of dubious credentials. Supplies go to the highest bidder.

Prices have risen exponentially. For example, surgical masks that sold for 20 cent now cost 10 times that much, not including transport or hefty commissions for middlemen. FFP2 surgical masks, reputedly the best, are selling for up to €4.95 each. The cost of disposable surgical smocks has risen from 30 cent to as high as €6.

At the same time, quality has deteriorated. The Netherlands had to recall 600,000 defective masks delivered by a Chinese manufacturer. Ireland has reported issues with personal protective equipment purchased from China.

On March 26th the European Commission lifted for emergency medical supplies the requirement for the CE stamp signifying conformity with EU health and safety standards.