Brussels on high alert after anti-terrorism raid leaves one dead 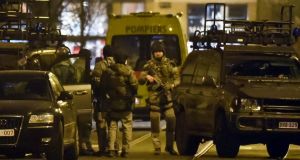 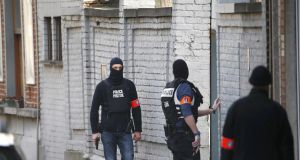 Police at the scene in Brussels where shots were fired during a police search of a house in the suburb of Forest. Photograph: Yves Herman/Reuters 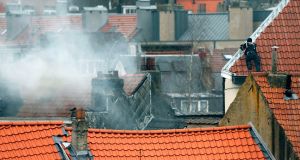 A masked Belgian policeman secures the area from a rooftop above the scene where shots were fired during a police search of a house in the suburb of Forest near Brussels, Belgium. Photograph: Francois Lenoir /Reuters 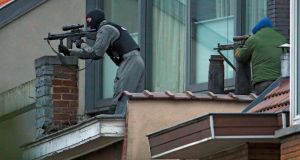 Masked Belgian police secure the area from a rooftop near the scene where shots were fired during a police search of a house in the suburb of Forest near Brussels, Belgium. Photograph: Yves Herman /Reuters

Brussels has been plunged into a state of high alert following an anti-terrorism raid in the south of the city which left one person dead and four police officers injured.

Heavy gunfire erupted in the district of Forest in southern Brussels around 2.30 pm local time on Tuesday in a counter-terrorism raid led by Belgian and French police.

A suspect, armed with a Kalashnikov rifle, was killed after police stormed the building more than four hours later. A French female police officer was one of the four police officers injured.

Two other people are thought to have fled the scene, sparking a major manhunt in the region. At least one separate police operation was taking place on Tuesday night in the Forest district.

While the identity of the deceased has not been revealed, authorities said that Salah Abdeslam, a key suspect in the November 13th Paris attacks, was not the target of the operation. The 26-year old Belgian national remains at large, four months after a series of attacks in Paris left 130 people dead. It is believed that those targeted in Tuesday’s raid were linked to several of the 11 Belgian nationals who have been charged since the November 13th attacks.

Streets around the Saint-Denis area of the Brussels suburb of Forest were closed to traffic on Tuesday evening, as helicopters circled the area and heavily-armed police patrolled the streets.

Two schools and two crèches – two of which were located on the same street where the initial raid took place - were placed in lockdown on Tuesday afternoon, though all children had been evacuated safely by early evening.

Located just 6 kilometres south of Brussels’ Grand Place in the centre of the city, Forest is a mixed residential area. Asked if the district was becoming the new Molenbeek – the Brussels suburb that was home to a number of the perpetrators of the Paris attacks - the mayor of Forest, Mark Jean Ghyssels, said the events could have taken place anywhere. “Today it’s Forest, tomorrow it could be anywhere.... This could take place in any street, in any town in the world.”

Belgium has found itself at the centre of an international counter-terrorism operation in the wake of the Paris terrorist attacks, following revelations that a number of the suicide bombers who perpetrated the Paris attacks hailed from Brussels. The November 13th attacks were masterminded by Belgian national and one time Molenbeek resident Abdelhamid Abaaoudd who was killed by French police in a shoot-out in the northern Paris suburb of Saint-Denis in the days following the terrorist atrocities.

Tuesday’s raid was undertaken jointly by Belgian and French police authorities. The revelation that many of the Paris attackers were Belgian residents who had spent time in Syria, had strained relations between the two countries in the wake of the Paris attacks.

Belgium has been under high alert since the Paris attacks and previous terrorist incidents, including a shooting in the Jewish museum in central Brussels in May 2014. As the headquarters of NATO and the main European Union institutions, security has been tight,, with a high presence of armed soldiers on the streets and in metro stations, as well as at embassies across the capital.