Terrorists in Spain had planned much bigger attack, say police 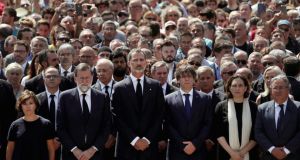 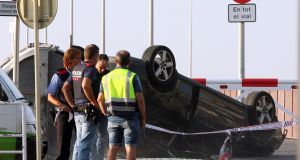 The car used by attackers in the coastal city of Cambrils, northeastern Spain. Photograph: Jaume Sellart/EPA 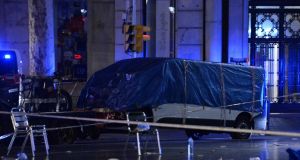 A van that drove into the crowd, killing at least 13 people and injuring around 100 others is towed away from Las Ramblas in Barcelona. Photograph: Josep Lago/AFP/Getty Images

The terrorists who killed 14 people in Catalonia on Thursday were planning a much bigger attack in Barcelona using butane gas, Spanish police said on Friday, and were thwarted only when they accidentally blew up the house where they were storing explosives.

The explosion in the early hours of Thursday at the property in the town of Alcanar, 170km southwest of Barcelona, killed one person and injured at least one more. Only hours later, a van swerved off the road in central Barcelona, driving into crowds of people who were walking along the Ramblas boulevard, killing 13 and injuring more than 100.

A second attack took place just after midnight on Thursday, when a car in the coastal town of Cambrils, 120km to the southwest, deliberately drove into pedestrians before police shot dead the five men in the vehicle. A woman who had been hit by the vehicle later died of her injuries.

Spanish police hunting for the driver of the van used in the Barcelona attack are focusing their efforts on a 22-year-old Moroccan national, according to reports.

Younes Abouyaaqoub is said to be at the centre of the investigation into the massacre on Las Ramblas.

According to Spanish newspaper El Pais, police in Catalonia said they were searching for the man, who is understood to be a key member of a jihadist cell.

Spanish police were on Friday night holding four men in custody who they believe were linked to the two terrorist attacks.

On an emotional day in Barcelona, large crowds gathered to observe a minute’s silence in the Plaça de Catalunya square, near where the van attack had started. King Felipe VI was present, alongside prime minister Mariano Rajoy and other political leaders.

“Let’s never forget that Spain is a nation united by certain values which make us proud: democracy, freedom and human rights,” Mr Rajoy said. “We have fought many battles against terrorism. On this occasion, we Spaniards are going to win again.”

Shops and restaurants were open again along the Ramblas on Friday morning, and on the central promenade candles and flowers were put out to commemorate those who died.

The Catalan police chief, Josep Lluís Trapero, said that three Moroccans and one Spaniard – from the north African city of Melilla – had been arrested since the attacks. None of them had prior records of terrorism-related activity, he said.

Mr Trapero emphasised the link between the Barcelona and Cambrils attacks. Spanish media also reported that the driver of the Ramblas van, who fled after abandoning the vehicle, was one of those later killed by police in Cambrils.

According to those reports, the man was Moussa Oukabir, a Moroccan teenager. His older brother, Driss Oukabir, was arrested on Thursday after it emerged he had hired the van used for the Barcelona attack.

Mr Trapero underlined the significance of the property in the town of Alcanar, which police initially believed was being used as an illicit drugs laboratory. One of the suspects was subsequently arrested there and the police believe the terrorist cell used the property as a base.

“The Alcanar explosion meant that they no longer had the materials they need to carry out bigger attacks in Barcelona,” the police chief said, suggesting that the cell had been plotting for months to kill people by detonating butane gas.

Meanwhile, nine of the 14 victims had been identified on Friday night, with tourists from Belgium, Germany, Italy, Portugal and the US among those killed. The youngest victim was a three-year-old boy from Catalonia.

A father and son from a Philippine family with Irish citizenship were among those hurt, sustaining non-life-threatening injuries.

Mr Rajoy is expected to review the country’s counter-terrorism measures on Saturday. That process will include deciding whether to raise the terror alert from level four, where it has been since June 2015, to level five, the maximum.

Prior to this week’s events, a total of 51 people had been arrested so far this year in Spain for jihadist activity and 11 of those were in the Barcelona area, more than any other part of the country.

On Friday night there were some clashes on the Ramblas as participants in an anti-Islam demonstration faced off with anti-fascist activists.