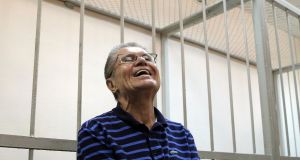 Signs of Kremlin infighting surfaced on Wednesday as Alexei Ulyukaev, the former Russian minister of economic development, told a Moscow court that Igor Sechin, the head of the state oil company Rosneft, had plotted with secret police to frame him in a high-level corruption case.

Russian prosecutors have accused Mr Ulyukaev of demanding a $2 million (€1.7 million) bribe from Rosneft in exchange for the economy ministry’s approval for Rosneft’s controversial takeover of Bashneft, another state-controlled oil firm.

If found guilty he could face up to 15 years in jail.

Mr Ulyukayev has been under house arrest since November 14th last year when he was detained by Russian police under suspicion of soliciting a bribe from Rosneft. Vladimir Putin immediately sacked Mr Ulyukayev, citing a “loss of trust” in the minister.

Russian prosecutors have now brought the case to court. Mr Ulyukaev, they say, met Mr Sechin on the sidelines of a Brics summit (the emerging economies of Brazil, Russia, India, China and South Africa) in Goa, India in October 2016 and demanded payment for the economy ministry’s approval for Rosneft’s acquisition of Bashneft, one of Russia’s fastest-growing oil producers.

Mr Sechin agreed, fearing reprisals. But before inviting Mr Ulyukaev to his office to receive the cash a month later, he notified Russian law enforcement agents.

At a court hearing in Moscow on Wednesday, Mr Ulyukaev denied soliciting a bribe from Rosneft and claimed he had been set up by Mr Sechin and Oleg Feoktistov, a Russian Federal Security Services general, who was at the time serving as head of security at the state oil company.

“I consider it essential to declare that the transfer of the sum was planned by the FSB,” he said. “Sechin himself telephoned me and, under the pretext of discussing a corporate matter, persuaded me to come to Rosneft where he gave me the money.”

Russian state media has given copious attention to the case against Mr Ulyukaev that comes amid an official crackdown on high-level corruption as the Kremlin prepares for the presidential election next year.

But political commentators say the arrest of a serving government minister – unprecedented during Mr Putin’s rule – signals a fierce clan war under way in the Russian ruling elite.

Mr Ulyukaev, who served as deputy chairman of the Russian Central Bank for a decade before being appointed to head the economy ministry in 2013, belonged to a group of economic liberals in the government who battle for influence in policymaking against a powerful camp of nationalists with strong links to the security services.

Mr Sechin, a long-time ally of Mr Putin, has led a campaign to assert state control over the Russian oil sector, scooping up assets for Rosneft in a series of controversial corporate takeovers.

Many observers were surprised by Mr Ulyukaev’s courtroom attack on such a powerful figure as Mr Sechin, who is widely feared in the Russian establishment. It is not yet clear whether the judge will call the Rosneft chief as a witness at the next court hearing on September 1st.

It was “usual practice” in court cases for “the defence to try to call Putin, Trump, the Lord God” to give evidence, he added. “Judges usually refuse such unfounded demands.”