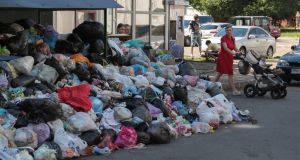 The Lviv garbage crisis might be over but it could yet taint the political future of the city’s mayor, Andriy Sadovyi. Photograph: Pavlo Palamarchuk/Reuters 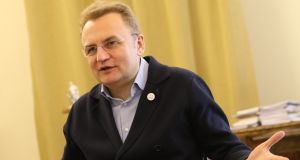 Mayor Andriy Sadovyi, who accuses Ukraine’s leaders of causing a garbage crisis in his city to sully his reputation and that of his party, Samopomich. Photograph: Roman Baluk

The stench of a long-running garbage crisis may finally be fading from the streets of Lviv, the picturesque capital of western Ukraine, but it could yet taint the political future of the city’s high-profile mayor, Andriy Sadovyi.

Founded in 1240, Lviv passed between Polish, Austrian and Soviet hands before Ukraine secured independence in 1991. The city’s patriotic people played a major role in the country’s 2014 pro-democracy revolution and continue to fight and die in its defence against Russian-backed separatists 1,200km to the east.

Its beauty, close links with nearby EU countries, and reputation for being more dynamic and less corrupt than other big Ukrainian cities have made Lviv something of a model for a nation in transition; it is also ripe for a tourism boom, with Ryanair set to join other low-cost carriers in serving the city this year.

As mayor since 2006, Sadovyi’s star has risen with that of Lviv. But alongside a growing reputation and greater influence has come conflict with Ukraine’s leaders – and now a politically toxic trash scandal that may kill off any hopes of national office.

It began in May last year, when a deadly blaze closed a large landfill that swallowed much of the garbage from Lviv’s 730,000 or so residents.

The council’s increasingly desperate search for alternative disposal sites was stymied, and soon stinking trash was piling up around overflowing containers across Lviv – sullying the city and Sadovyi’s reputation as an exemplary mayor among a host of crooks and incompetents.

The crisis coincided with a souring of relations between Sadovyi and the party he leads, Samopomich (Self Reliance), and the Ukrainian president Petro Poroshenko and the government of prime minister Volodymyr Groysman.

Bemoaning stalled reforms and continuing corruption, Samopomich’s 26 deputies left the ruling coalition early in 2016 – placing them and Sadovyi in opposition to the biggest beasts in the cut-throat world of Ukrainian politics.

“No one else in Ukraine could arrange this,” Sadovyi said of his belief that Poroshenko and Groysman had ensured that local officials and landfill owners across the country refused to help Lviv dispose of its garbage.

In an interview with The Irish Times, Sadovyi said he agreed with a former top Ukrainian intelligence official that the trash “blockade” was part of “a special operation using many agents and law enforcement and state officials” to destroy the popularity of the mayor and his party.

The blockade would have been lifted quickly if he and his allies pledged loyalty to Poroshenko and Groysman, Sadovyi claimed.

“That offer was made. It was very specific and categorical that Samopomich would have to be subordinate,” he said.

“But I don’t own the party deputies – they belong to Ukraine and they won’t make any deals against their own conscience or their own country.”

As some 11,000 tonnes of trash accumulated in Lviv – most of it outside the historic Unesco-listed city centre – Sadovyi last month urged Groysman to declare an “ecological emergency” and several Samopomich deputies went on hunger strike.

“Please, don’t blame others, but get on and do it, show the whole country how it should be done,” Groysman shot back, accusing Sadovyi of failing for a decade to build a recycling plant or find another solution to Lviv’s garbage problems.

“With billions of hryvnia in the bank, he was either unable or unwilling to do it,” Groysman said. “How can I help? You were given land and you didn’t like it, you’ve got cash, planning documents were agreed...What else should I do to bring order to the city?”

As well as revealing the growing rifts in Ukraine’s political landscape two years before presidential and parliamentary elections, Lviv’s crisis has highlighted a major environmental issue.

Ukraine still buries 95 per cent of its solid waste in landfills – compared to 45 per cent in the European Union – and recycling is uncommon; Sadovyi and other officials have even proposed using the exclusion zone around the former nuclear power station at Chernobyl as a dumping ground for garbage.

Last week, Lviv city council agreed to pay the regional authorities – run by allies of Poroshenko and Groysman – to dispose of Lviv’s waste as part of a plan that foresees a recycling plant finally being operational by 2019.

Rubbish bins around Lviv are now starting to be emptied again but – as residents wonder how much reputational damage has been done to their city and its mayor – Sadovyi warns against believing the promises of Ukraine’s leaders.

“I’m a great optimist as far as Ukraine’s long-term prospects are concerned. But I’m a realist because I know personally everyone involved in Ukrainian politics today,” he says.

“But this is my country, I have no other, and I want to win – because that’s what Ukrainians need.”