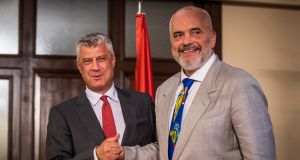 Kosovo’s president Hashim Thaci has received staunch backing from neighbouring Albania after announcing that he will resign immediately if a judge decides that he should be tried for war crimes and crimes against humanity.

The Kosovo specialist prosecutor’s office, based at The Hague, revealed last week that Mr Thaci and associates had been indicted for alleged involvement in “nearly 100 murders” as well as torture, forced disappearances and other crimes during and after a 1998-9 war between Kosovar rebels and Serbian forces.

In an address shown on Kosovan television on Monday evening, Mr Thaci vehemently denied any wrongdoing but pledged to step down if a judge at the so-called Kosovo specialist chambers confirmed the charges.

Albanian prime minister Edi Rama said on Tuesday he was visiting Pristina and meeting its leaders – including Mr Thaci – to show “full support to Kosovo and all its political representatives at a time that something grave and deeply unjust has happened”.

Echoing Mr Thaci and the feelings of many people in mostly ethnic Albanian Kosovo, Mr Rama criticised the special court for focusing on alleged crimes committed by Kosovar separatist rebels during the war rather than on Belgrade’s often-brutal crackdown on what was then a province of Serbia.

The vast majority of the 13,000 people who were killed and the more than one million who were displaced during the conflict were ethnic Albanians. In the aftermath of the war, however, armed Kosovar groups were accused of launching reprisals against political opponents, Serbs, Roma and other ethnic minorities.

Mr Rama also questioned the timing of the announcement from The Hague, which came as Mr Thaci set off for Washington to hold talks at the White House with Serbian president Aleksandar Vucic. The meeting was subsequently cancelled.

“The meeting at the White House was a very important moment and an opportunity to move the process forward to a new level, and with the direct support of the United States, ” he said.

With EU-brokered talks between the Balkan neighbours on hold since late 2018, the US has sought to mediate on economic issues that could lay a foundation for Serbia finally to recognise Kosovo’s 2008 declaration of independence.

Many Balkan analysts believe the White House’s surge of interest in the protracted dispute suggests it is pushing for a deal that could boost US president Donald Trump’s foreign policy credentials during his re-election campaign this year.

With the cancellation of the White House talks, however, the EU is now poised to restart the Pristina-Belgrade dialogue next month.

“If the accusation is confirmed, I will immediately resign as your president and face the accusations,” said Mr Thaci, who was a political leader for the rebel Kosovo Liberation Army.

“Political mistakes in peacetime I could have made but war crimes – never!”